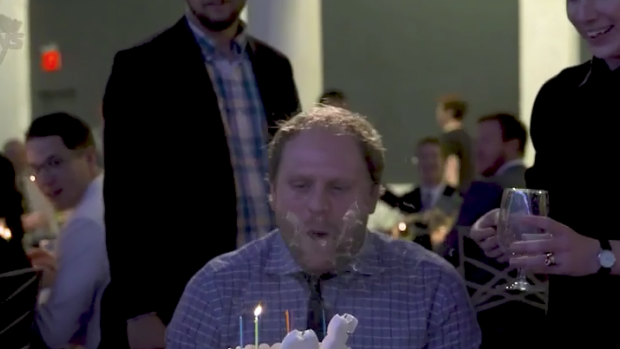 Phil Kessel celebrated his 30th birthday on October 2nd, and video of his special day has now surfaced.

The two-time Stanley Cup champion has organically morphed into a legend, for his terrific laugh, the way he presents himself in the media, and his love for hot dogs.

While he may be more a salts type of guy, the Penguins couldn’t resist into give Phil his own special birthday cake.

Since 81 candles on a cake would be ridiculous, the Penguins opted to just give him eight candles to work with, which sounds like it wouldn’t be too hard to blow out all at once. But for Phil the thrill, it was apparently a little overwhelming to handle.

Phil is not one to handle the pressure of a moment that’s solely focused on him, and you can tell once he struggles to blow out the final two candles on his cake, especially that last one. Olli Maataa’s reaction to this is priceless.

We know Phil’s conditioning has been an issue in the past, but does an NHL superstar that explodes up and down the ice on the regular really not have the lung capacity to blow out a couple candles? To be fair, we know how tough some candles can be to resisting a breath of air.

There’s a ton of funny moments in hockey when Phil Kessel is in the middle of something, and this surely won't be the last time. And let's give Phil some credit for opening up about his battle with cancer on Tuesday.