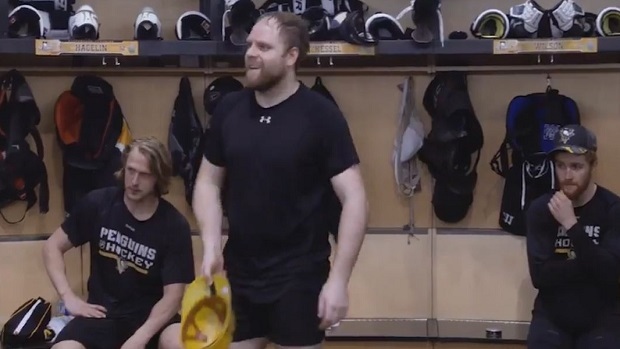 The Pittsburgh Penguins picked up a huge win on Wednesday night, as they defeated the Washington Capitals 3-2 in Game 4 to take a 3-1 series lead without Sidney Crosby in the lineup.

FINAL: Justin #Schultz's second period goal gives the #Penguins a 3-2 win and a 3-1 series lead over the #Capitals.

There was a lot of tension between the two sides as every player seemed to be on edge leading up to the game and they didn’t calm down once the game started.

Early in the first period, one of Phil Kessel’s blades popped out of his skates and he was absolutely furious with the team’s equipment manager.

However, the Penguins were able to relax after the game as they escaped with the victory, and no one was happier than Phil Kessel.

Following the game, the team returned to their locker room to find their captain at the front of the line to greet and congratulate them, but no one was louder than Kessel when they returned, especially when he gave Marc-Andre Fleury the player of the game honours.

You know Phil’s excited when you need to bleep out some of his speech. The Penguins can wrap up the series on Saturday night at the Verizon Center.