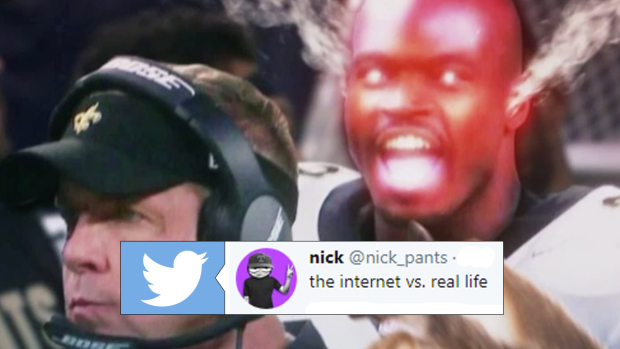 His first game away from the team didn’t go exactly as planned, as Peterson’s rookie record for opening day with the Vikings was broken by his replacement, Dalvin Cook, he only got six touches and 18 yards and the Saints lost to the Vikings 29-19. Perhaps worst of all, Peterson got in a little spat with head coach Sean Payton on the sidelines and it got totally blown out of proportion.

Of course, with the way the internet works nowadays, an animated exchange like this in an event where everyone was watching, well that’s just asking to get memed.

I can’t wait for the internet to put thought bubbles over that Adrian Peterson/Sean Payton conversation we just saw.

Ask and ye shall receive.

the internet vs. real life pic.twitter.com/gFgktDV2sK

"CAN SOMEONE TELL ME WHAT A PO'BOY IS?" pic.twitter.com/eobkgrdvOF

Adrian Peterson look like he bout to throw hands with Sean Peyton pic.twitter.com/0qqkqsntBm

Of course, after oddly saying he would keep the conversation confidential, AD took to Twitter to explain himself.

Let's be clear...I said we need to run the ball up their Donkey. Nothing more. I'm passionate but respect my coach at the same time