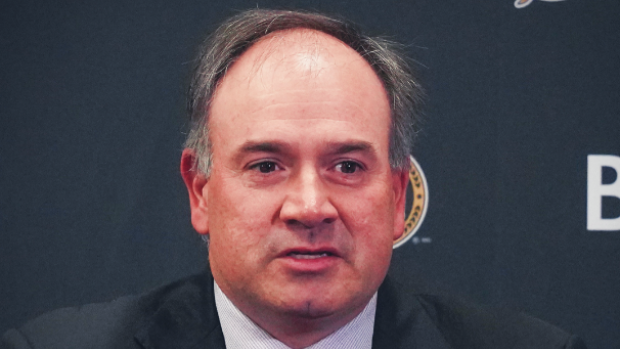 It’s been tough sledding in Ottawa ever since their charge to the Eastern Conference Final back in 2017. In the following four seasons, the Sens have failed to make playoffs. In fact, they haven’t even come particularly close.

Instead, the Sens have prioritized gathering draft assets and conducting a rebuild. While Sens GM Pierre Dorion has been able to lock up some young and promising pieces, it still came as a surprise to many to hear his comments from preseason claiming the rebuild to be over.

"The rebuild is done. Now we're stepping into another zone," says Dorion. #Sens

Coming off a 23-28-5 season, these comments were confusing to some fans. They hadn’t necessarily seen the results of a successful rebuild, but regardless is set a tone for the year. Since then, Sens fans have been spitefully echoing Dorion’s rebuild comments as the team has gotten off to a league-worst 5-15-1 record thus far in 2021-22.

Speaking to the media on Saturday, Dorion attempted to clarify what he meant by “the rebuild is done.”

Dorion on the rebuild is over: "What I should have said all the core pieces are in place." #Sens

Regardless of what was meant, some fans aren’t happy with the clarification.

Or maybe don't say anything until you resemble anything close to being a playoff team https://t.co/5KsSGmhTcJ

“What I should have said was the exact opposite of what I actually said.” https://t.co/Qi98zbXW4L

Their rebuild is far from over. Yes the sens have a great pool but you can't expect to make the playoffs by paying 4 third lines... Still lots of work to do https://t.co/vlV7QeiXGk

No not really. You have weaknesses down the middle and on D. Should have addressed that to make the team more competitive and build confidence with fans. You get a D- for your effort all around.

Clearly not the case. C'mon fans are not falling for any of that.

Other fans are a little more forgiving, believing that the Sens are at least headed in the right direction.

He's right. Tremendous amount of development, bump & buses, ahead. Still a few years away. As a Leafs fan 16 & 34 are just starting to mature now.

Anybody who didn’t understand that this was what he was really saying was just being difficult for the sake of it. Obviously he didn’t mean they were Stanley Cup bound this year. Pieces are here, now time to build through experience and growth