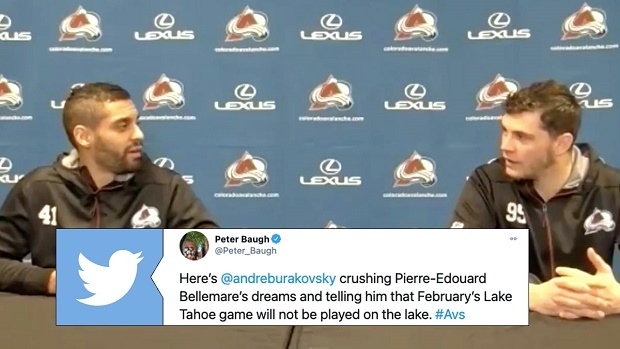 The NHL got the week started by announcing two outdoor games for the 2020-21 season which will take place in Lake Tahoe, Nevada.

The first of the two games will feature the Colorado Avalanche and the Vegas Golden Knights on Saturday, February 20, and the second will feature the Boston Bruins and the Philadelphia Flyers the following day.

On Tuesday, Avalanche forward Pierre-Edouard Bellemare shared his excitement for the outdoor game with the media only to have his hopes and dreams shot down by teammate Andre Burakovsky.

Here’s @andreburakovsky crushing Pierre-Edouard Bellemare’s dreams and telling him that February’s Lake Tahoe game will not be played on the lake. #Avs pic.twitter.com/Umha9Srtpk

This entire time Bellemare thought they would be playing on Lake Tahoe, but he found out in the middle of his answer that the game isn’t actually going to be played on the lake, but instead right beside it.

Ya know who is feeling good?

Belly was stoked on opening night, his quarter zip, being named before Burky, and Lake Tahoe 😂#GoAvsGo pic.twitter.com/kCZRD6X8U9

He’s probably still stoked about playing in the outdoor game, but the excitement level might have gone down a notch.