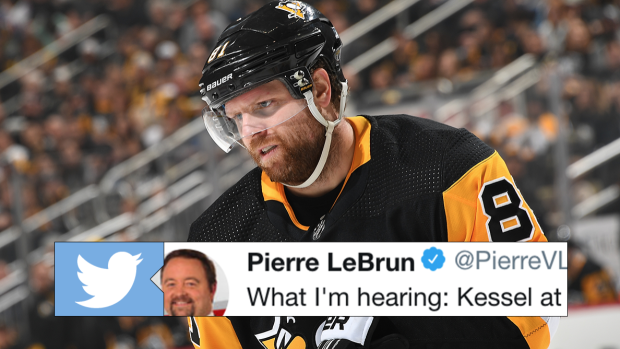 The Stanley Cup playoffs haven't ended yet, but we're already hearing rumours that will have an impact on next season and beyond.  There are a number of big names that have been involved in trade rumours so far this summer, one of who is two-time Stanley Cup champion Phil Kessel.

The former Leaf found a perfect home in Pittsburgh, but based on the rumours, his days as a Penguin could be numbered.  Thursday, there was a lot of chatter about some trade talks involving Kessel between the Penguins and Wild, and Pierre LeBrun provided the latest update on the situation.

What I'm hearing: Kessel at the moment is not leaning towards waiving his NTC to go to Minnesota but that doesn't mean it ultimately couldn't happen eventually. However, there are a few clubs on his 8-team YES list that have contacted Pittsburgh so we'll see where that goes... https://t.co/i41y6sIIU3

Penguins GM Jim Rutherford continues to talk to other teams about Kessel ... it's a question of when not if for Kessel to be dealt but where exactly remains TBD.

What's most interesting out of all of that great information is that Kessel has an 8-team YES list and we can't help but wonder what teams are on that list.

Is Nashville one of those teams by any chance?

The Penguins were swept in the 1st round of the playoffs by the Islanders and for a team not that far removed from Stanley Cup riches, a shakeup like trading one of the better goal-scorers in hockey could be what ignites the Pens to get back to past glory or sink them in their pursuit of another championship.

Penguins, #mnwild in trade talks surrounding Phil Kessel. @JoshYohe_PGH has confirmed what I reported Tuesday about potential Jason Zucker-Victor Rask for Kessel-Jack Johnson swap. Lots of details in this story + other possible landing spots for Zuckerhttps://t.co/TOM2dZhbQk