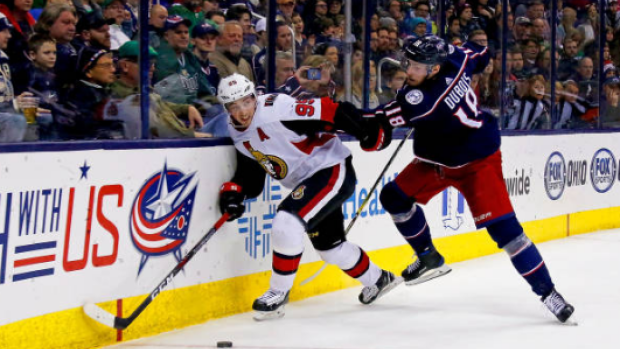 In the recent weeks, the discourse around the NHL rumour mill has prominently featured the Columbus Blue Jackets' unique situation with pending free agents Artemi Panarin and Sergei Bobrovsky. With the team in playoff contention, it appears the Blue Jackets could actually be both buyers and sellers leading up to the February 25th trade deadline.

According to Pierre LeBrun, the Blue Jackets are looking at how they could replace the hole up front that would be left if Panarin is dealt. One option the team is reportedly looking at is Ottawa Senators centre Matt Duchene, who will also be free to sign anywhere in the league come July 1st unless signed to an extension.

🏒 Big week as Jets seek Top 6 W
🏒 #Flames interest in Stone
🏒 Urgency for #NHLBruins with 88 out?
🏒 #CBJ’s end game with Panarin
🏒 Mazanec/#Canucks
🏒 When is Sekera EDM-bound?

"I can tell you a name, Matt Duchene, they have interest in if and when the Ottawa Senators make him available. So, what they get for Panarin in a separate deal has to outweigh what they would pay for Duchene in terms of the outlying asset that would remain alive after those two deal," LeBrun said on the latest edition of Insider Trading.

"Otherwise, if it’s a wash, why trade Panarin? Why not make him your own rental? That’s what the Blue Jackets are grappling with right now."

The Jackets would have the cap space to sign Duchene, but the question comes down to if the 28-year-old would rather test the open market to see what other offers would be presented.

Columbus currently has Pierre-Luc Dubois anchoring the top line with Panarin and Cam Atkinson. The Blue Jackets sit third in the Metro with 67 points and look to be in good position to qualify for the post-season for the third straight season and are still seeking their first playoff series victory in franchise history.

In his 11th season in the league, Duchene is scoring at the highest rate of his career with 53 points (25 goals, 28 assists) in 47 games in a contract year.