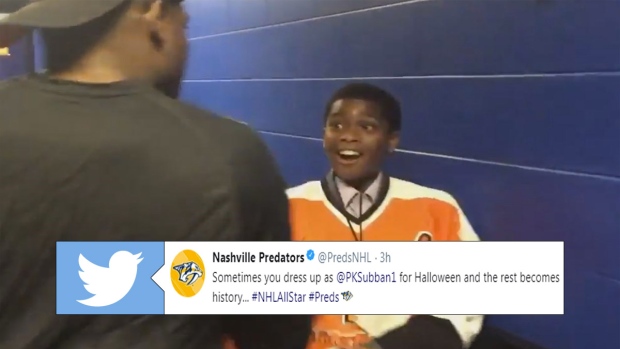 Whether or not you like the way he plays the game, Nashville Predators defenceman P.K. Subban is one of the most influential athletes in all of sports.

The 28-year-old has gained celebrity status over the course of his NHL career, but it isn’t entirely because of his play on the ice. Through his charitable initiatives off the ice, Subban has become a positive role model for many hockey fans and non-hockey fans around the world and he is showing no signs of slowing down.

The feeling when you get to meet one of your favourite #NHL players. . @subbanator surprised some lucky fans ahead of the #NHLAllStar Skills Competition. . (🎥: @predsnhl)

Ahead of the NHL All-Star Skills Competition on Saturday night, the 2013 James Norris Memorial Trophy winner surprised a couple of fans outside the locker rooms and you can tell they were pretty nervous to meet one of their idols.

The feeling when you get to meet one of your favourite #NHL players. . @subbanator surprised some lucky fans ahead of the #NHLAllStar Skills Competition. . (🎥: @predsnhl)

Nothing beats the look on the first kid’s face the moment he makes eye contact with Subban.

Considering the two youngsters had just met Claude Giroux seconds before that, the look on the first kid's face shows just how much Subban means to him.

Not a bad way to cap off a week that already included a guest appearance on The Daily Show with Trevor Noah.

PK with a great one-liner! @subbanator made a guest appearance on #TheDailyShow with @trevornoah on Wednesday night. . Watch more on BarDown.com