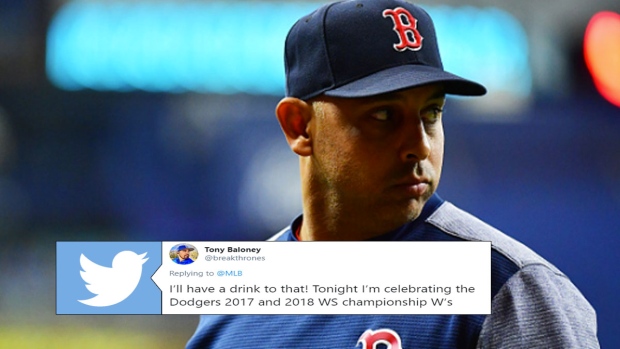 “If you’re not cheating, you’re not trying” is a famous quote in sports, but it’s not exactly one to live by.

The Houston Astros got the week started by firing team manager AJ Hinch and general manager Jeff Luhnow for their roles in the Astros’ illegal sign stealing operation and on the Boston Red Sox followed in their footsteps on Tuesday evening by parting ways with Alex Cora.

The #RedSox and Alex Cora are parting ways.

Cora joined the Astros as a bench coach in November 2016 and was with the organization before joining the Boston Red Sox as their manager in 2018 and leading them to a World Series title.

Statement from the Boston #RedSox and Alex Cora: pic.twitter.com/qXsUhSobSy

As a result of the news, there were plenty of mixed reactions from Red Sox fans, and baseball fans as a whole, on Twitter.

Now announce him being banned for life

I’ll have a drink to that! Tonight I’m celebrating the Dodgers 2017 and 2018 WS championship W’s

I’ll have a drink to that! Tonight I’m celebrating the Dodgers 2017 and 2018 WS championship W’s

Sucks Alex Cora is out. Big fan of his.