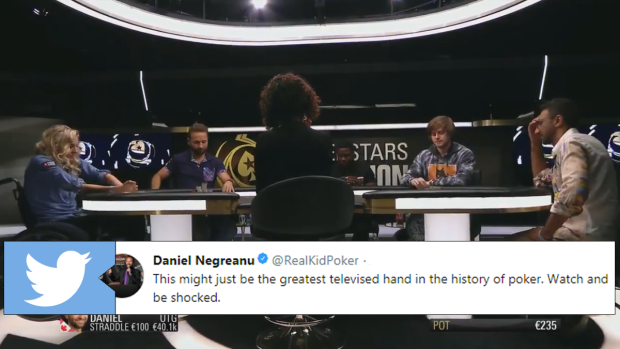 When it comes to Daniel Negreanu, it’s hard to know if he’s bluffing or not, but we’re all in on his raise for the “greatest televised hand in the history of poker”.

The Canadian poker legend was at the table as it all unfolded, but he wasn’t even around for the flop. The bulk of the work in this moment was carried by Mila Monroe and Kevin Hart. From the blinds, they are the only ones in and they’re both bluffing… at least, it looks like they are.

Hart’s reveal at the end of the hand is bigger than any card in the game.

This might just be the greatest televised hand in the history of poker. Watch and be shocked. https://t.co/POa12FUNZe

So, Hart claims to have misread his cards. It may seem hard to believe at first, and it kind of look like he feels guilty about winning, but one user pointed out that it is definitely possible that he thought his three was a Jack and actually thought he had a straight.

At a quick glance, the 3 can definitely be mistaken for a Jack. pic.twitter.com/gAzTyOvupW

It makes for a weird moment where Mila appears to have played a great bluff, but then gets unintentionally called by Hart. We’re not sure that it’s the greatest hand in poker history, but Hart has a way of making anything he does a little more exciting.

Still, it’s hard to beat seeing two experienced poker players duking it out like we saw from Negreanu not long ago.

"Holidays with Hellmuth" ends with @Phil_Hellmuth in the #PokerAfterDark winner's circle thanks to an ice-cold cooler against @RealKidPoker.
🙈❄️🙈❄️🙈❄️https://t.co/rP1pY3VmIH pic.twitter.com/TFFtNoSHSu