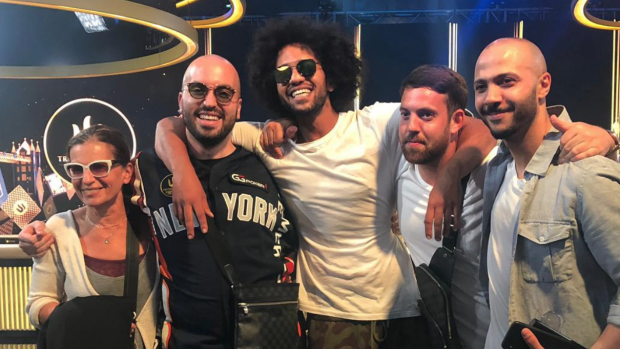 There are a lot of big names in poker right now, but there's only one all-time money leader in the game and that is Bryn Kenney.

Hit number 1 winner all time yesterday. Always said I would hit it, follow your dreams and believe in yourself always

The 33-year-old from Long Beach is a household name in the poker world and he's also a big sports fan that has had the opportunity to play some hands with a few professional athletes and Canadian poker legend Daniel Negreanu.

We recently spoke to Bryn about making it to the top of poker's all-time money leader list, his run-ins with athletes at the table, and much more!

Luca Celebre: How did you first get into poker?

Bryn Kenney: I first started playing the strategy game Magic: The Gathering when I was 12 years old and instantly was drawn to games. I played until I was about 16 which was the age that my friends started playing poker. I was immediately hooked and spent 12-14 hours a day playing.

LC: Did you ever think poker would become a career when you first started out?

BK: When I first started playing poker I didn’t really think about it as a potential career path. I just enjoyed playing the game and loved the competition. I was motivated to try and be the best at it but it didn’t cross my mind as a full-time profession.

LC: What was the moment that you knew you could be one of the best poker players in the world and take your career as far as you wanted to take it?

BK: One of my close friends from childhood told me that when I was 18 I would tell him that I was going to be the best poker player in the world one day. I’m a strong believer that anything can become a reality if you put your mind to it.

LC: Who did you admire or look up to when you first started playing?

BK: When I first started playing I looked up to a friend of mine Isaac Baron. He was crushing everything and all types of games. I wanted to achieve success just like him.

LC: What component of poker was the most difficult and took the longest time to learn?

BK: The most difficult component of poker to learn is staying strong when things go against you. For example, when you’re in a bad run and losing all or most of your money it’s not easy to keep your confidence but at the same time it’s necessary to survive.

LC: A lot of people watch poker on TV and think it's so easy and they can have the same success as you and other professionals. If there's one thing you'd want the "average joe" to know about how hard poker is, what would it be?

BK: People think many things are easy when they don’t understand the journey it takes to get there. I’ve had millions and I’ve had negative millions. I accepted that in life I would take chances to run up big amounts but at the same time I was mindful if I hit a certain amount in poker I would explore other career options. I want people to know that my success didn’t happen overnight. I dedicated 15 years of my life to poker, practicing all day, every day.

LC: With me being from Toronto, Daniel Negreanu is always a name that comes to mind when talking about poker because of his success and unique style of play (he loves to talk haha!) What's it like playing at the same table as him?

BK: He makes it fun for the players to play by talking and making them feel comfortable. This is a very important part of the game which people forget. Recreational players are there to play for fun and if you want poker to continue being a great game then you want them to come back.

LC: We love sports at BarDown and we've heard a lot of epic stories about athletes gambling. Given your incredibly successful career, what's the craziest run-in you've had with a professional athlete in regards to gambling or playing poker?

BK: I haven’t played with many athletes. They don’t tend to play in the high stakes tournaments. Although, this past summer at EPT Barcelona I played in the same tournament as Gerard Piqué and Arturo Vidal  Vidal was playing a lot of hands, laughing and smiling the whole time. He was very fun to play with and we didn’t even speak the same language. I’ve also played with Richard Seymour at the PokerStars Caribbean Adventure in the Bahamas. He’s a really cool guy and it was a fun experience.

LC: Are you a sports fan and if so, what teams do you cheer for?

Taking Granny to the Yankees Game for the first time in the new stadium for her. #family#love#generations#og#oggranny#yankees#yankeestadium#pokerface

LC: Did you ever in your wildest dreams envision becoming the all-time money leader in poker and what does that accomplishment mean to you?

BK: The end goal for me was to achieve the #1 all-time money spot. I always felt and thought that it was going to happen. I really believe that no dream is too big as long as you will put in the work and sacrifice to get to where you want to be.