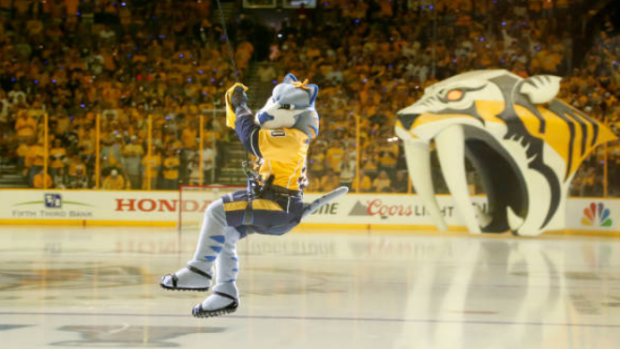 The Vegas Golden Knights not only set the standard on how to play with an up-tempo style while relying on their depth to produce up in down their lineup last season, but they also paved the path on providing fans with quality pre-game entertainment.

Considered to be one of the best pre-game show for its extravagance, the Golden Knights relied on an actual golden knight to battle a character of their opponent like a jet for the Winnipeg Jets, or a senator to represent the Washington Capitals with each side taking half the ice.

The reigning Western Conference Champions were in Nashville on Tuesday to take on the 2016/17 Western Conference Champions. The Preds organization decided to have a little fun with the Golden Knights pre-game ceremonies from last spring by dressing up a golden knight equipped. Naturally, the crowd at the Bridgestone Arena let the boos fly as he knight taunted the crowd.

Then, from the rafters came Gnash, the Predators mascot, who brought a guitar and smacked the back of the knight, knocking him to the crowd, much to the applause of the Nashville faithful.

Take notes, fellow mascots, as that's how you endear yourselves to your fanbase. After all, Nashville and Vegas both pride themselves on entertainment, so why not have a little fun once in a while, right?

Looking for someone who can fix a broken guitar. The Vegas Knight broke it with his back. #itsallhisfault pic.twitter.com/iJckTCSEf1