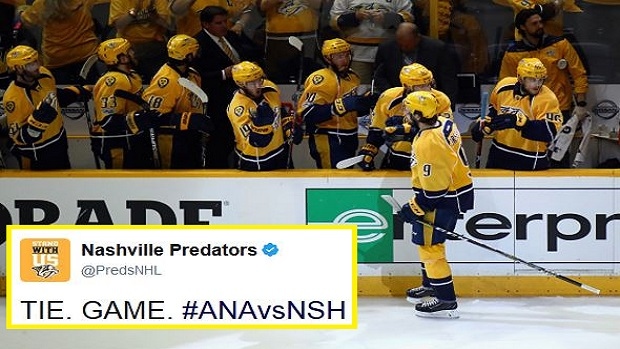 The Nashville Predators faithful have done a really good job throughout the postseason showing hockey fans why the city is referred to as ‘Smashville’.

Aside from letting fans smash away at old cars covered in their opponent’s team colours and logo, they’ve stood behind their team every single night.

Trailing 2-0 in the third period of Game 4 on Thursday night, the Predators put together a late comeback in hopes of going up 3-1 in their series against the Anaheim Ducks.

Goal officially Subban from Wilson at 13:33 of the 3rd. #ANAvsNSH

After P.K. Subban got the Preds on the board at the 13:33 mark of the third period, Filip Forsberg came up with a bigger goal nearly six minutes later.

Forsberg’s seventh of the postseason and fourth in his last four games was a big one as it sent the game to overtime, and you can bet it got the fans off their feet.

According to ESPN 102.5 The Game, the Preds faithful at Bridgestone Arena reached 129.4 dB while cheering after Forsberg’s late game-tying goal, which is a record for loudest NHL arena.

As for the record for loudest crowd roar at an indoor sporting event, they fell 1 dB shy of the record which was set by Kansas basketball fans at Allen Fieldhouse earlier this year.

It’s too bad the Predators didn’t come up with the victory in overtime or else the fans probably would have gone way past the 130.4 dB mark.

The #Ducks hold on to defeat the #Predators in overtime of Game 4.