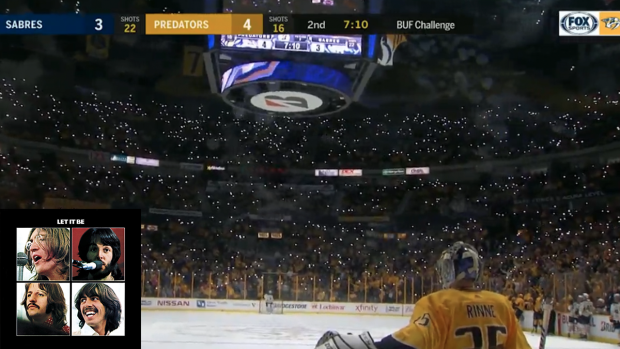 Last spring, the hockey world learned that the fans down in Nashville aren’t cut from the same cloth that most fans are.

The country music capital of the world embraced the team like no other as they went on their first Stanley Cup run in franchise history. Although the team fell short of their goal, the lasting memories made down in Smashville transformed the city into a legitimate hockey market. The club recently hit their 100th consecutive sellout in row dating back to April 2, 2016, with no signs of easing up anytime soon.

You’ll be hard pressed to find a more engaged fanbase in North America that is on their feet the whole game singing, coming up with hilarious chants, or taking an old tradition and putting their own spin on it in the form of throwing cat fish out on the ice.

During Saturday night’s game against the Sabres, Preds fans once again one upped themselves. During the second period of action, Nick Bonino made a crafty move to slip a puck past Chad Johnson on his backhand. Buffalo challenged the goal for goaltender interference, and that’s when the Preds unveiled what we hope is their latest new tradition:

Singing The Beatles’ “Let It Be” as the refs reviewed the play with the NHL’s hockey operations department while waiving their phones in the air with their flashlights turned on.

@predsnhl fans started singing #TheBeatles “Let It Be” with their cellphone lights turned on after the @buffalosabres challenged a goal for goaltender interference. . #Preds #Smashville #Nashville #Sabres . (🎥Via Fox Sports Tennessee)


Magical. If that doesn’t lift the hair on the back of your neck and get you amped for playoff hockey, then we’re not sure what will.

As the commentators pointed out, that was the third time the Preds fans have done this, but this might be the best footage to blossom. While we all admire the passion and fun exerted from fans over in Europe bring by singing their own customs chants, this is right up there.

What an amazing moment. Unfortunately for the Preds, they ended up losing 7-4. Can we just fast forward to the playoffs already? We can’t wait to see what Smashville has in store.