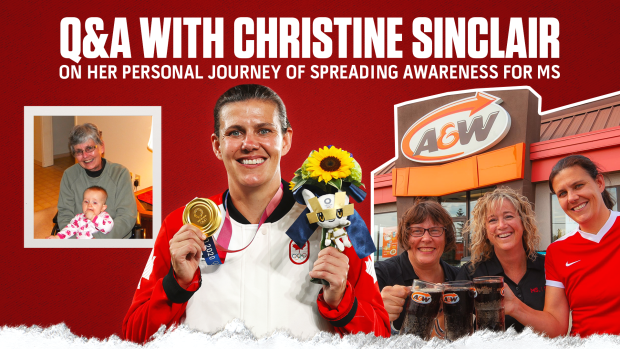 When you think of Christine Sinclair, there may be a few things that come to mind.

The Canadian soccer star has a pretty extensive list of accomplishments to her name. Having played over 20 seasons with the senior national team, the Olympic gold medalist and two-time Olympic bronze medalist, currently leads the world for the most international goals scored (190) for both men and women. To put it simply, she’s the GOAT of Canadian soccer.

Not only is she inspiring many on the field, but she is also making a powerful difference off of it that can’t be overlooked. Sinclair plays a massive role in fundraising efforts for Multiple Sclerosis.

With a personal connection to MS, the national soccer team captain decided to partner up with A&W Canada and the MS Society of Canada to raise money for the disease. For the past 14 years, A&W has donated $2 from every teen burger sold on one day of the year to the MS Society of Canada. In honor of this year's Burgers to Beat MS Day, Sinclair took time from her training in Portland to discuss with BarDown’s Raegan Subban about personal connection to MS, her involvement with raising awareness and how it impacts Canadians as a whole.

Raegan Subban: Thank you so much for taking the time to speak with me today! Obviously this day is tough for you but I really appreciate you sharing your own personal experience with this. To start, how did your partnership with A&W come about?

Christine Sinclair: MS is obviously something that hits close to home, in my family. My mom was diagnosed 40 years ago. So I grew up in a household with a family member living with MS and yeah, unfortunately, my mom passed away earlier this year due to complications with it so I've joined forces with the MS Society of Canada and A&W to raise some money and awareness to try and put an end to this disease.

I can only imagine how hard this year has been but it’s incredible that you continue to make a difference. This will be your sixth year in the partnership. What does that mean to you and why is it so important?

Well, what I do on a soccer field is cool and hopefully it can inspire kids and some people to dream big, but this is a legacy. This is my mom's legacy and being able to partner with a Canadian company like A&W and raise money for MS for research, for programs, for support of those living with MS. I have seen firsthand the toll it can take on a family. Ideally at some point in the future, there's a world where, you know, MS is gone, and that families don't have to go through what I've had to go through. So that's the goal. That's what we're working towards.

How does it impact the Canadians individually who don't have MS or a connection to it?

I think, first of all, MS is a disease that I think much like my mom, a lot of people suffer in silence while growing up. It wasn't something that was talked about. I didn't know other people that had family members with MS and it wasn't until I started sharing the story that you realize how common it is in Canada. For some reason, Canada has one of the highest rates of MS in the world. Unfortunately, there's no known cause or cure. So for me, this campaign is about bringing awareness to the disease, getting people to talk about it, so people can better understand it and can better understand the difficulties for people and families. Then, just try to help. I know my mom suffered a lot throughout the years, and I don't want to see that. I don't want to see other people go through that.

What do you think the biggest misconception is when it comes to MS?

It's not even a misconception, I just feel like it's unknown. People know the name and that's about it. And because it's a slow moving disease for the most part, it's usually not something that'll, you know, kill you in a year, so it's kind of put on the backburner. People suffer in silence and I just want Canadians to realize that they probably know people with MS without even knowing it, and to bring it into the discussion, similar to cancer, things like that.

It absolutely deserves to be in more discussions as well. With that said, how much do you think awareness has grown over the years?

See, that's hard to say. I know from myself, it's grown a lot since participating in this campaign. Like I said, before, I thought I knew no one besides my mom. Since sharing her story, the amount of friends that have come up to me and said oh my god, my mom has it as well or my Aunt. It just goes to show that it's around and people suffer in silence. In the six years that I've been a part of it, I've definitely seen growth. Especially with social media and stuff like that. I think that's really helped bring it to a new level,. I'd just like to just see it continue.

If there's one thing you want everyone to know about MS, what would it be?

I think my message would be more to the families that have someone living with MS. Just that you're not alone, that there are support systems, there are programs out there. They're not always the easiest to find and that's part of the goal here is to make those more accessible to people all across Canada. There are programs and treatments that are getting better.