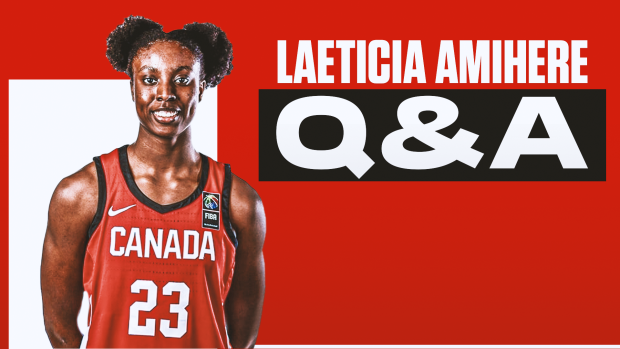 Laeticia Amihere may be experiencing some delayed gratification. As a 15-year-old, she became the first Canadian woman to dunk in a game; the video went viral, and she joined South Carolina soon after as a top-10 recruit in the 2019 class. Amihere, who grew up in Mississauga, was being hyped as Canada’s next big thing in basketball. (Canada is always looking for its next big thing in basketball.) Momentum in sports is a fickle thing, though, and she suffered a knee injury before her first season in college that slowed the plans.

These days, the knee is healthy, and Amihere is feeling like she’s back. She says she’s “stronger, quicker” than before, with a pair of double-doubles in the early season to prove the point. Like any young basketball player, her hopes sprawl in all directions. She’s thinking NCAA championship, Olympic gold and a WNBA career all at once. There's more gratification to come, hopefully, and she already has the support of one of the biggest stars in Canadian basketball — Kia Nurse — in her corner.

Mississauga's very own Laeticia Amihere was on absolute fire tonight with 11 PTS, 15 REB, 2 AST, and 2 BLK for South Carolina. 🔥 pic.twitter.com/WCN5HTAPa6

Amihere joined BarDown over Zoom to discuss the support she’s received from Nurse, her internet-famous dunk and the bright future of Canadian women’s basketball.

BarDown: So, we actually had Kia Nurse on SportsCentre recently and she was talking about your athleticism and your talent. You got the chance to play with Kia and some of the other Canadian professionals on Team Canada. Did you get to learn anything from being around them and getting to know them?

Amihere: Oh yeah, for sure. Kia had amazing seasons in four years at UConn, so obviously as a young basketball player looking up to Canadians in the NCAA, that’s for sure somebody that sticks out. It’s always great to see us Canadians excelling down there in the south.

Have any of those players been a mentor for you at all?

When I was just getting recruited, I was talking to Kia, and then as soon as I committed, she sent me a long message. It was really comforting to see her support, and all the support from the Canadian basketball staff. They paved the road for me, so I’m really just trying to follow in their footsteps and try to excel like they did.

That message, if it’s something you can share, what did Kia say to you?

She basically was telling me how as Canadians, we have a chip on our shoulder because we’re going into the States and we’re trying to make a mark for ourselves. She just really told me that the work doesn’t stop now.

When I committed, I was on a high, of course. I was excited that I was going to a top program, but she told me that the work doesn’t stop there, that I really have to go out there and excel and put Canada on the map. It was really encouraging. She told me that it’s going to be tough when I get there, but if I ever need anything, she can be there to help me out.

Do you look at the class of players coming up right now and think that same thing at all?

Man, it’s so funny because the few games we’ve had so far this season, in almost every game I’m playing against one of my old teammates. It’s crazy because a couple years ago, you didn’t have that many Canadians on top-level programs. It’s just so exciting to see Canadian basketball on the rise, and being able to compete against my old teammates. It’s so good to see.

Obviously, the Olympics were pushed back this year, but the Canadian women remain ranked fourth in the world right now. Does it feel like you guys have a good thing going into that chance to play for gold next year?

That’s always been the goal for us. Canadian basketball, we’ve done a lot of different things to just change how we’re trying to progress. We’ve changed the style of play and just how we train our athletes with OSBA programs [Ontario Scholastic Basketball Association, the provincial high school prep basketball program] and prep programs in Canada.

All those things, that’s really what has helped us get to the next level and that shows in our placement in the world right now.

A lot of people know you from that video a few years back, when you became the first Canadian woman to dunk in a game as a 15-year-old. Do you still hear from people about that dunk, or is it more just something that’s in the past now?

[smiles] No, I still hear about it every day. I’m still waiting to get my first one in college. I had a couple opportunities, but you know, I got fouled, so I mean, I’m just waiting. I know it’s something exciting in the women’s game right now. You’re seeing a lot more women attempting to dunk and dunking in game, so that’s just exciting to see the level of basketball rise.

Steal and the SLAM!! 🤤😥
Laeticia (@_Theblackqueen_) goes coast to coast and tears the rim down!! 🙈🙌#teamO #teamO #teamO pic.twitter.com/zMlOkqvwkW

While we’re talking about dunks, did you see [Stanford sophomore] Fran Belibi dunked again a few days ago?

I did. It was amazing. I’m trying to get mine in too. [laughs]

You were a top-10 recruit in the 2019 class, but I imagine your knee injury has made the transition to college a little more challenging. Do you feel like you’re getting things back on track this season?

I definitely feel stronger, quicker. I just feel like my old self, and I’m excited to finally put that into fruition and help my team win a championship this year.

Was that comeback process challenging at all for you?

It was, it was. I did [suffer another injury] a year before, so it was something that was back to back. But, you know, I had a great support staff at South Carolina and also Canada Basketball. During the whole process, they were there for me, so that was encouraging and it helped me ease the process.

What’s it like to have Dawn Staley, obviously one of the all-time greats in women’s basketball, as your coach?

It’s amazing. Other than just being the best coach that she is, she’s a great person off the court. She’s such a great role model when it comes to every single aspect that you need to become a powerful woman. I love Coach Staley, and that’s one of the big reasons that I went to South Carolina.

There’s a lot of hype that comes with being a top recruit from Canada, just because I feel like Canadians are always looking for that next big thing in basketball, you know? Does that ever feel like a burden at all, or does it add weight to your shoulders?

I don’t think so, because we’ve had such great players. Like I said, Kia really paved the way for a lot of Canadians. I think it’s just moreso exciting because you have a lot of people looking up to you back home. That just gives me motivation to keep going and to keep paving the way for more Canadians to come.

Are there any players you look up to, and try to incorporate some of their game into your game?

6-foot-4 with moves like a guard.@_Theblackqueen_ moves have that international flava 🇨🇦 pic.twitter.com/LJwXuKDEqF

When you go to a top program, you always shoot for the highest of highs. When you go to a team like South Carolina, you’re always aiming for the championship. Coach Staley, she’s no stranger to championships. We practice every day like we’re practicing for the championship, and that’s something that’s always in the back of our heads. We have a great team, and I’m just excited because when you have a great team, you’re always trying to strive for the best.

And then long term, what are your goals in mind?