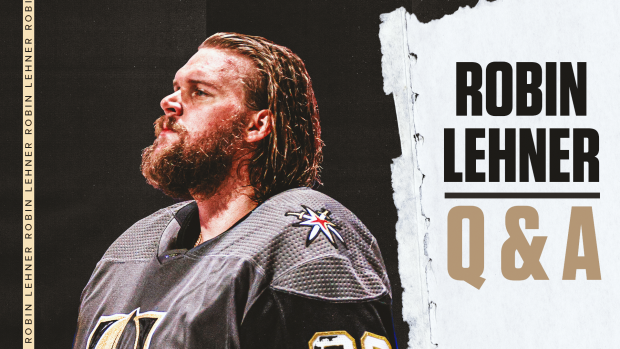 After Jake Paul shocked the sports world with his knockout win against Nate Robinson, other athletes from all kinds of different sports chimed in on social media with a few even wanting to take on Paul themselves. One of those was Vegas Golden Knights goaltender Robin Lehner, who kept his take on a fight with Paul short, sweet and to the point.

Of course, we had to get Lehner on the phone to talk about this. “I think I’ll destroy him. I mean, I can take a punch or two,” the goalie told BarDown in an interview.

Lehner also talked about his custom gear, the myth that he only sharpens his skates once a year and the goalie tandem in Vegas with him alongside Marc-Andre Fleury.

Last weekend, there was a big celebrity boxing match between Jake Paul and the former NBA star Nate Robinson. After the match took place, Jake took to Twitter to call out Conor McGregor and pretty much anyone who was listening, and you and a couple other NHL stars clapped back.

Were you watching the fight? What made you want to respond to this tweet?

It was all in good fun. I mean, yeah, he’s a pretty arrogant person, and I believe I would destroy him.

I’m with you on that. If there was a fight, I would definitely have you as the favourite.

Yeah, I haven’t talked to any outlets or anything about it, because honestly, you know, I’m a hockey player. It’s not that serious.

The last question I have about that is, I have a scenario for you. You versus Jake Paul, 12-round fight, how many rounds is it lasting, and who’s taking the fight?

[laughs] I don’t know... I think I’ll destroy him. I mean, I can take a punch or two, so I don’t know. Guess we’ll see if Evander [Kane] can get [a fight] going there. We’ll see what happens.

Now, I just wanted to talk to you about your gear a little bit. I design some gear on the side, and over the last few seasons, you’ve kind of emerged as one of the most stylish goalies in the league, basically — ever since you started exploring with your sets in Buffalo. I just want to know, what made you start getting into the custom gear?

As a goalie, you obviously have that perk that you can do some different types of designs and stuff like that on your pads. When I was with Vaughn, you know they’re pretty standard types of looks. They wanted all of the Vaughn [gear] to kind of look the same and they didn’t have that much freedom back then, when I was with them.

They have some really nice different things now too, but I think it was when I switched over to Brian’s — me and Chris [Joz, the pro rep] at Brian’s — we work well together. I think Brian’s has put in a little more emphasis on the custom design and they work with some different people that helps to make it look nice. I definitely come and tell them kind of what I want. They send me a bunch of different options, and then I make some tweaks to them. We try different stuff which is fun with Brian’s, definitely a lot of credit to Brian’s.

While we’re talking gear here, I do have a question that I’ve always wanted to ask you. Every year the story kind of goes around the goalie world and I’ve never known if it’s true or not. I’ve always wanted to know because I’ve been perplexed by it. Is it true you only sharpen your skates once a year?

Some years, like, I didn’t sharpen them a lot to begin with. There’s been, probably like twice a year before, then when I got to Long Island, they forced me to sharpen them a little bit more.

But, I like them dull because of my movements, side-to-side. Most of my pushes, I use my toes anyway, and I’m a big heavy guy so I get enough grip to do all my pushes. It’s not once a year anymore, I don’t know, maybe it’s two or three times, maybe more now. When they get really, really dull, I don’t take care of them that well, because I want them dull. Even when I get them sharpened, I’m doing different ways to kind of get them duller right away anyways.

I think everyone moves differently. Some people might push with their heels or middle of their blades, stuff like that. I use my front toes a lot.

That makes a lot of sense. I was going to say, I can’t go even three games without sharpening my skates, but I use the flat of the blade.

Yeah, and I don’t do that at all. Because I’m a big guy and I weigh quite a bit, it doesn’t really affect me. I get down in the ice quite a bit anyway, so I don’t really need them to be that sharp. In the crease, I like the middle and back part of my blade to be [dull], because when I shuffle side to side, I want it to be responsive.

I don’t move quite the same as a lot of other goalies. A lot of other goalies do a lot of T-pushes back and forth. You don’t see me do a T-push very often. I do more C-cuts or shuffles, small rotations and stuff. I just need the front and back end of my skate to be a little sharpened, so I can push forward with a C-cut. As I said, because I have strong legs and I’m a big guy, I dig into the ice quite easy.

If you were trying to explain your style to someone who doesn’t get it, why do you play the style you do as opposed to a traditional, maybe, butterfly style? How does it help you?

I mean, I think I still play butterfly style. I think everything’s going to play towards their body type, their strengths, their weaknesses, so I’ve just learned that, the less I move, the more I can read the play and see what’s going on and focus a little more on the puck. When the other team has a power play, you’ll see a lot of goalies, they’ll try to stay on top of their crease line a lot and they T-push just back and forth for two minutes.

I do a lot of pre-scouting, I know who’s going to take the shot, what the plays are, and I just stand in the middle of the net and see the puck and stand tall. I don’t move much. It’s been working for me, my save percentage in penalty kill has been pretty good over the years, and I just think that for me, moving less has been better. If you’re constantly in the middle of your crease, it’s just a small push to whichever side the one-timer comes from. If you’re on top of your crease line, if the shot comes from the point from the defenceman, you’re too close to the screen. It’s kind of hard, you get less of an angle to actually see the puck.

I just learned to be more efficient as the years have gone by. I think in the beginning of my career in the NHL, I moved around a lot too, but that kind of screwed me up quite a bit because I’m a big guy too. It’s kind of like cheating a little bit, calculated cheating. It works for me.

It’s also about your body too, because I feel you see all the new young goalies come into the league over the last bunch of years. Everyone has hip surgeries and surgeries all over the place really early in their careers these days. That extreme butterfly and all the new post work and all that stuff that everyone wants to do, it tears up your ankles and your hips. I’ve had two injuries, really three now with my shoulder, in my career over ten-something years. One was a concussion, the other one was a fluke accident — I got caught in a rut on the ice and twisted my ankle. But, I’ve had no other problems, and I’m a big guy, so it’s still a bit about longevity for me as well.

Now there’s been a little bit of outside noise about the tandem of you and Marc-Andre Fleury in Vegas. In my eyes, and I’d imagine in a lot of the league’s eyes, you guys have to be up there as one of the best, if not the best, goalie pairings in the league right now.

So is there anything you’ve gotten to take away from working with Marc so far and how much do you look forward to that going into the season?

There’s a lot of really good tandems across the league. I do believe, especially with the goalie format in the NHL or in hockey in general, it’s so trendy. A new thing comes and everyone jumps on the train. Over the last few years, especially since I was in Long Island, a lot of people keep saying, yeah, tandems is the new way, that’s what works the best and all that stuff.

I think it’s a great thing to have if you have it. It’s an amazing thing to have two good goalies. It’s good for the team. It can be tough, depending on the personalities of the goalies, how to handle not playing a lot. Some goalies like to play a lot and they get better by playing a lot. There’s definitely some truth to that.

Marc, we have a great situation here in Vegas. We have two strong goaltenders, and it’s been good so far. I don’t expect that to change. As far as whether it’s for the best or not, I think there’s a bunch of good tandems out there that are going to be really strong for their teams.