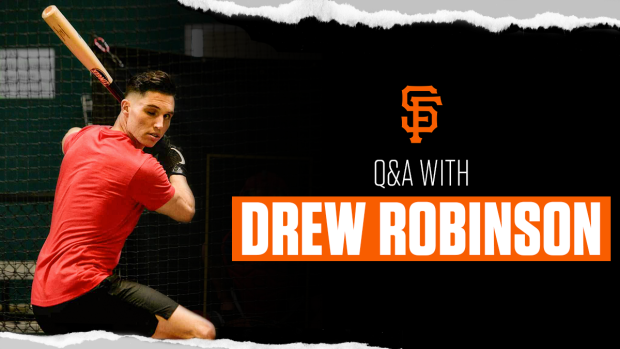 Note: This story contains mention of a suicide attempt. If you or someone you know is having thoughts of suicide or is in emotional distress, contact the Canada Suicide Prevention Service at 1-833-456-4566 or at https://www.crisisservicescanada.ca.

For those unfamiliar with his story, Drew lost his right eye due to a suicide attempt in the spring of 2020. He survived for 20 hours before he called 911.

His story was shared with ESPN’s Jeff Passan.

Robinson’s second chance has been nothing short of remarkable and utterly inspiring.

Six months after his attempt, Robinson signed a minor league deal with the San Francisco Giants and made the Opening Day roster with the Triple-A Sacramento River Cats.

The moment every baseball fan has been waiting for: a Drew Robinson bomb! 💣 @Drewrobbb

During the same season, Robinson announced his retirement after spending 11 years in the systems of the Giants, the Texas Rangers, and the St. Louis Cardinals - including 100 MLB games.

In his next journey, he would continue to help and inspire others, transitioning into a mental health advocate role with the Giants’ front office.

“While I’m proud of my progress, growth is a continuous journey. For the Giants to believe I can help other players address their emotional well-being more comfortably and gain insight from my lessons learned is truly humbling.”

Our interview on Drew’s perspective of athlete mental health, his current role with the Giants, and his emotional support dog, Ellie, can be viewed below.