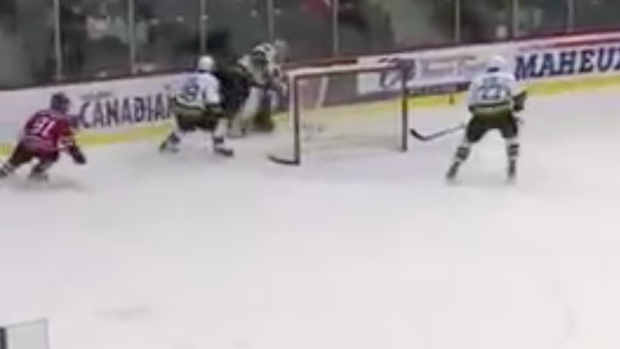 There's nothing a goalie scoring a goal in any level of hockey.

First of all, they are so rare, and secondly, every star has to align for a goalie to even get an opportunity to score.

Obviously an empty net at the other end of the ice helps, and that was the case in the Val-d'Or and Quebec game Saturday night.

Your chances probably increase if your team has a big lead, which the Foreurs did late in the third period.  Plus, it doesn't hurt if your team is short-handed because you won't get called for icing the puck.

You see where we're going with this, right?  With his team short-handed and the net at the other end of the ice empty, Foreurs goalie Etienne Montpetit fired the puck down the ice and scored to make it 6-2 for his team.

Once the puck went in the net, his teammates swarmed him and the commentators went nuts, too.

It's always cool to see a goalie score, especially when the commentators and teammates get into it.

Montpetit also made 33 saves in 6-2 win, but we guarantee nobody will be talking about his stellar performance between the pipes.