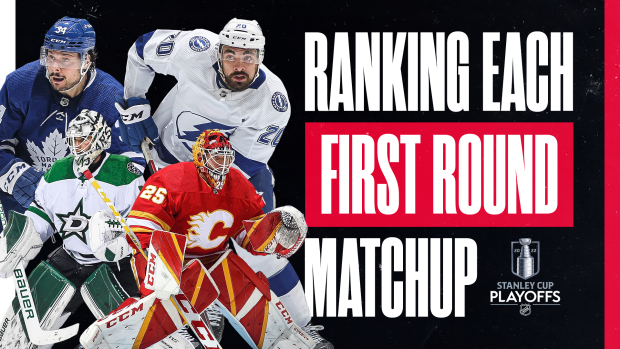 Wow. Everyone take a deep breath. The 1st Round of the Stanley Cup Playoffs was absolutely electric.

Five of the eight series went the distance, with the New York Rangers, Tampa Bay Lightning, Calgary Flames, Edmonton Oilers, and Carolina Hurricanes each advancing past their opponent with a Game 7 win. As a hockey fan, you can’t ask for much more than that. Only one series last less than 6 games, which you may or may not see reflected in the following rankings.

If you don’t agree with our rankings, feel free to let us know!

Whether or not you agree with the rest of the list is to be determined, but we can probably all agree this series was the least entertaining for the non-partisan hockey fan. As expected, the Avs had no problem disposing of the Preds, and it wasn’t particularly close.

Sure, they went to overtime once, but when all the dust settled the Avs outscored the Preds 21-9 in the series. Even if Juuse Saros has been playing, it would have been a tall task to win against the Avs while only scoring nine goals in four games.

The Avs will likely be involved in some of the most high-octane series in these playoffs, but the Preds simply could not match them. Sorry guys, 8th place.

the colorado avalanche as soon as the nashville predators took the ice pic.twitter.com/297XuIWxIQ

More of the same from the Mediocre Wild. I mean, the Minnesota Wild.

The advanced stat darlings of the league once again struggled to gain much momentum when playoffs rolled around, and the end result was a 6-game exit at the hands of the Blues. The Wild – who consistently struggle to gain the label of ‘threat’ year after year – may need to take a deep look into the identity of their team. While Kirill Kaprizov is as electric as anyone in the league, the rest of the well-balanced roster doesn’t have the true difference-maker ability that’s crucial in playoffs.

What really made this series sag was the goal differentials, though. There was never really even a threat of overtime. There was no game that was decided by less than three goals.

While the Avalanche and Blues were the victors in what we’ve determined to be the two least entertaining series, we are VERY excited for their upcoming series.

This basically slots into the 6th ranking based on the fact that all the other series above it went seven games.

Panthers vs. Capitals was actually really entertaining, especially based on how it all unfolded. For a while there, it looked like the Panthers were in for another disappointing 1st round exit after winning the Presidents’ Trophy (which, ironically, is what the Caps were known for just a few years ago).

Already holding a 2-1 series lead, the Caps were threatening to move up 3-1 in the series with a late lead in Game 4. To the relief of Panthers fans, Sam Reinhart managed to tie it up with minutes to go, and Carter Verhaeghe won it in OT.

The Cats would then win two more games to close out the series, thanks in part to 12 points from Verhaeghe. This series was insane even just for Verhaeghe alone.

A few players that stepped up big for their team in Round 1. 💪 pic.twitter.com/Z6VlaAT8dC

In fairness to this series, it was insanely entertaining towards the end – particularly Game 7. The reason why it is the lowest ranked of the five series that went the distance is because the beginning of it was a bit of a snooze-fest.

Sure, we can appreciate the goaltending a lot, but anyone that wants to see two consecutive shutouts with a combined three goals scored is likely the same kind of sports fan that enjoys a good pitcher’s duel in baseball.

Saying that, Game 7 was almost good enough to single-handedly move this series up the list. Jake Oettinger’s legendary performance in the loss will go down as one of the greatest playoff performances that didn’t result in a win, while Johnny Gaudreau’s OT winner was one of the most hype moments of the entire postseason so far.

… the other half of the Battle of Alberta!

This series definitely had the feel of another disappointing exit for the Oilers. It was a script we’d seen written so many times recently, we almost didn’t even stay for the ending. Luckily we did.

Connor McDavid lived up to expectations with an incredible 14 points in the seven games. This series was full of juice from the beginning, with the underdog Kings coming SO close to pulling off the upset.

The stars shone, the momentum swung, and overall this series was incredibly entertaining. Now we’re just buzzing for Calgary vs. Edmonton.

Literally any playoff series that involves the Boston Bruins is going to be entertaining. I’m sorry, but that’s just a cold hard fact.

The whole Prius vs. Lambo narrative was actually overshadowed by the Brad Marchand vs. Tony DeAngelo feud.

There weren’t many close games, with only Game 7 finishing in a one-goal difference, but the level of animosity between these two teams was higher than any other series. In the end, it was unlikely hero and deadline acquisition Max Domi that scored two goals in the final meeting to secure a W for Carolina.

Another year, another 1st Round exit for the Leafs. That alone is one of the biggest storylines from the first round.

The game play between the Leafs and Bolts was a lot of fun, too. There were blowouts in Game 1 and Game 4, with Game 2 and Game 3 also being a bit less exciting, but Games 5, 6, and 7 were all one-goal games that easily could have gone either way.

In the end, Leafs lore deepened with another disappointing 1st round exit which, you could argue, is the most entertaining outcome that could have happened.

Ahead of the playoffs, we ranked this as the matchup we were most excited for. Not to brag, buuuuut…

Rangers vs. Penguins was the most entertaining series of the postseason so far in our opinion. It had so many elements to it that made it so.

The Rangers looked to be in serious danger of a hugely disappointing upset, with the Penguins hopping out to a 3-1 lead in the series. Those losses included a triple OT loss in Game 1, as well as a wild Game 4 in which the Rangers battled back from being down 4-1 to to it up 4-4, only to go on and lose 7-4.

The Rangers showed their resiliency in Game 5 after finding themselves down 2-0 with the 2nd period coming to a close. In the final 5 minutes of that period, they scored three quick goals and then gave up one more. They would go on to win 5-3, but the work wasn’t done there.

Game 6 – the Rangers were down 2-0 AGAIN! They would go on to score three in the second and give up another AGAIN! They would score two in the 3rd to win 5-3 AGAIN! This game was also the first without Sidney Crosby, which – of course – was another spotlighted moment from the series.

And, as if any of you forgot, Game 7 was electric as well. You can’t ask for anything more than a Game 7 overtime winner, and it was star forward Artemi Panarin that played hero.

What a comeback, what a series. Rangers vs. Pens take top spot.

WHOEVER DID THIS TO PANARIN’S WIKIPEDIA PAGE I LOVE YOU. YES. pic.twitter.com/4jxC4OIhoC