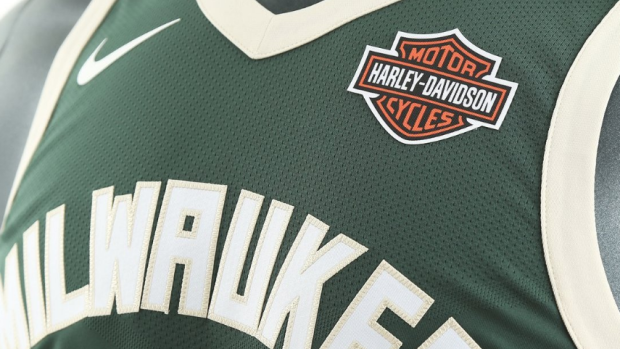 The NBA off-season brought about a great deal of change and while the majority of the discussion has been on player acquisitions, one of the biggest changes was Nike taking over the league's apparel contract from Adidas.

On top of every team receiving new uniforms, a number of franchises will also feature sponsors on the front of their jerseys for the first time in the history of the NBA. Some of the sponsor logos blend it quite nicely with the team's jersey redesign, while others kind of stick out like a sore thumb.

It's also worth noting that a large number of teams have either not announced a jersey sponsor or will not have one this season, including the Knicks, Bulls, Thunder and Wizards. We won't be grading every jersey that has a sponsor logo, as we're fairly neutral with how a number of the designs turned out. Let's start out with the ones we liked.

First and foremost, nobody can compete with the Jumpman logo. With Michael Jordan as an owner, they have replaced the Nike swoosh on their jersey with the Jumpman logo, but in this we're just going to talk about the totally seperate sponsors that appear on the right side.

Out of every jersey to feature a sponsor logo, the Cavaliers may be the only team that truly benefited from the addition from a design standpoint. The Goodyear logo is rather iconic, and the logo colour blends in quite well.

Unlike the other team's that went ahead an placed brand logos on their jerseys, the Jazz went with a charitable organization instead of a corporation. Utah-based data and analytics research firm, Qualtrics, will sponsor the patch on the Jazz jersey. But rather than put their company's logo on the jersey, Qualtrics chose to place the logo for 5 For the Fight, a charitable organization that is trying to eliminate cancer via $5 donations. Now that's a patch we think everyone can love.

I'm no Orlando Magic fan, but I'm on board with this jersey sponsor logo :) #Disney #Orlando pic.twitter.com/uVBuIVJe1O

This one just makes sense. Orlando and Disney have long been synonymous with one another, as Walt Disney World theme park is located near the city.

The Boston Celtics were one of the first teams to announce the addition of a sponsor logo to their jerseys, and while they took a lot of heat at first, it would be hard to say that the logo looks out of place. Much like a number of the teams featured in the "good" section of this list, the Celtics elected to have the General Electric logo match the colours of their uniform. For those wondering why GE, the corporation's headquarters are located in Boston.

Another smart incorporation of a brand logo. Luckily for the Timberwolves, Fitbit's logo has a similar colour scheme to the team's so it blends in quite well. Also, bonus points for having a fitness-based company sponsor your team, as it's pretty on brand.

The Greek Freak is ready for his close up!! #BucksMediaDay pic.twitter.com/2yaoSUmsHy

Harley-Davidson, the major American motorcycle manufacturer, was founded in Milwaukee, so it does make sense for the brand to sponsor the team. What doesn't make sense is why the company elected to keep their logo orange, as it completely clashes with the Bucks predominately green design.

The Miami Heat's patch is a strange one. While the Ultimate Software logo is just plain black script, it just doesn't really mesh (no pun intended) with the Heat's jersey. It kind of just looks slapped on.

A majority of the teams featured on the "bad" list have one thing in common. The brand patches on their jerseys look like...brand patches. Sponsor logos can be incorporated tactfully. The Pistons patch is one example of how not to do it.

Another patch that just doesn't sit right with the overall team design. Which is a shame, as the Kings' new jerseys look great. Just not quite as great with a giant blue almond brand patch on it.

The team has agreed to terms with @KrisHumphries and Emeka Okafor.

This patch has the look of something that was slapped on at the very last second. Almost like the team had thirty seconds to come up with something to place on their jerseys and they just went..."errrrr, I don't know, buying sports tickets is cool, right?!" But hey, at least fans in Philly will know where to look first when looking for tickets to Sixers games.

"Hey, did the Nets add a logo to their jersey this season?"

*takes a look from 2kms away without binoculars*