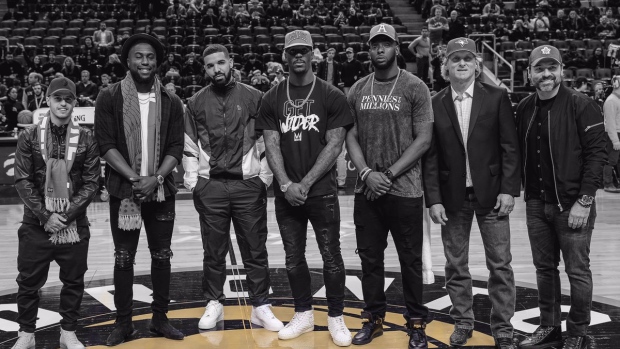 The Toronto Raptors and Drake brought the city of Toronto together on Friday night as a part of the “Welcome Toronto” promotional night.

The new partnership between OVO and the Raps aims at bringing the community of Toronto together by using the sport of basketball and art.

Some of the biggest sports stars in the Toronto were on hand for Friday’s tilt, as well as former notable athletes that made their mark in the city.

After the picture went out on Twitter, the Jays, Leafs, Argos and TFC all tweeted the same photo, but tweaked the colours to highlight their respective athletes.

Look at Kelly Gurber’s flow! Did you ever imagine him in a picture with Giovinco and Drake?

It’s pretty neat to see some of Toronto’s most popular sports figures come together to honour the city on a night where all eyes were on this marquee match-up.