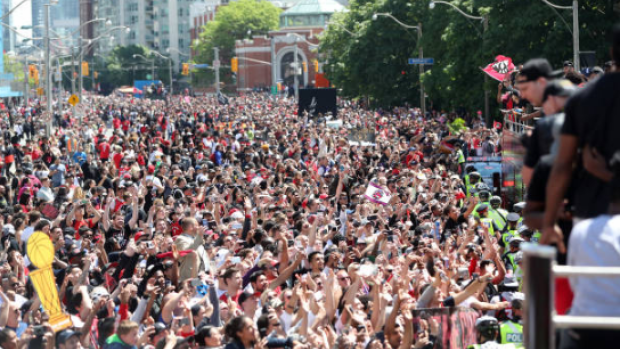 When millions of people jam into a downtown core for a parade, there will unfortunately be some serious issues that come to the forefront.

At the Toronto Raptors parade on Monday, fans in attendance at Nathan Phillips Square scrambled to take cover after shooter unleashed several shots out into the public.

The shooting was the biggest problem to overshadow the celebration, but the problems didn't stop there. Thousands of fans became dehydrated when temperatures soared into the early 20's.

Another big issue was that children were separated from their parents in the waves of people. Lost amongst the crowd, a group of good Samaritans were able to help track the lost kids back to their parents, along with 52 Division police officers.

One video surfaced showing a crowd chanting "we found Landon" in hopes of attracting the parents. Sure enough,  the little boy was reunited with them.

Fav moment from #RaptorsParade: A crying kid who lost his parents gets taken in by the crowd. Crowd starts a "We Found Landon" chant to attract attention. Before long he gets reunited with his parents, cheers n tears all around pic.twitter.com/t5EmowWp2w

Now that's some sharp, on-the-spot thinking! Well done to everyone involved who helped bring Landon back to his parents.