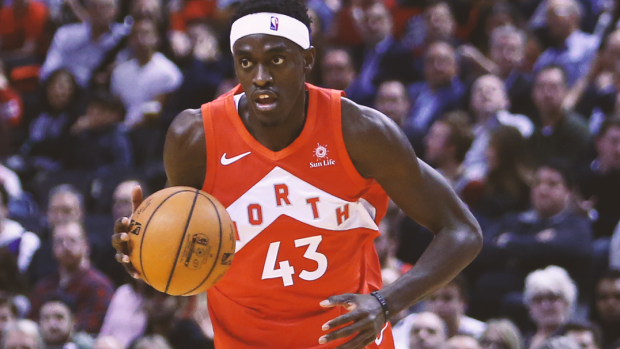 The NBA’s Most Improved Player is staying in Toronto. According to ESPN’s Adrian Wojnarowski, Pascal Siakam has agreed to a four-year, maximum contract extension worth $130 million with the Raptors.

Pascal Siakam is staying in the North 🌶

The contract extension kicks in for the 2020-21 season, after Siakam plays out the last year of his rookie contract.

It was expected that the Raptors would agree to a deal with the 25 year old, who became a core player in last season’s title run and one of basketball’s fastest-rising young stars. With Kawhi Leonard gone, Siakam should have a chance to continue his development as a potential No. 1 option in the offense.

Raptors fans are definitely excited to have Spicy P in Toronto for the long haul.

Raptors could have maximized their 2020 cap room by waiting to sign Siakam as a RFA in the summer. They they opted to extend him now speaks to their confidence in and commitment to him. They see him as the future face of the franchise.

3 years ago he was a surprise 27th pick.

Now he's an NBA champion, the league's reigning Most Improved Player, and will make more than $130M over the next 5 years.

Wow... @pskills43 Pascal Siakam really realized his father’s dreams. What a way to honor his father! Proud of you!!! 🙏🏽❤️🏀

Congratulations to Pascal Siakam. May no one spell your name Siakim again.

Three years ago, Pascal Siakam didn’t make 130 shots in a season. Today, he agrees to a $130 million extension. A pretty incredible, rapid rise,

A simple reminder that Pascal Siakam didn't start playing organized ball until he was 18.

Congratulations, @pskills43! All of Canada looks forward to watching you grow as a player!

Pascal Siakam is a prime example of play your game where they appreciate you and you'll get rewarded for it.

Pascal Siakam and the Toronto Raptors have agreed to a four-year max extension. Much deserved after a great campaign! #TakeASeat pic.twitter.com/vsHpr9fiK5

congrats to @pskills43! worth every penny of this. scored big buckets in the playoffs, in the finals, in g6 of the finals. and most importantly is becoming a better basketball player every day. https://t.co/FsD5QxtkBb

From a late first rounder and a G League player to MIP and a champion👏 @pskills43 you get what you deserve 💰💰 https://t.co/tQQ819xuF6

Pascal Siakam should be a reference point for all young aspiring hoopers. He has lived in the gym and added something new to his game every season. Now he has a MAX contract. SELF MADE SAVAGE 🔥

Welcome to the Pascal Siakam era.