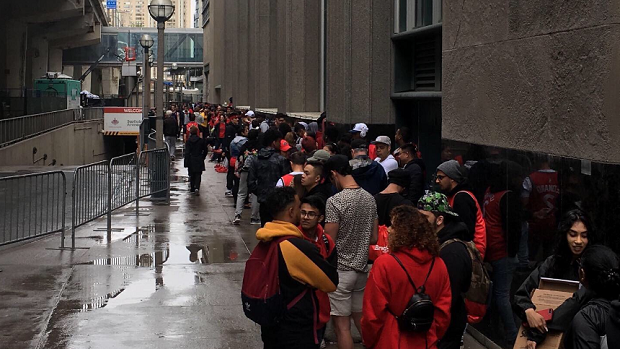 All of Canada, and Toronto especially, has Raptors Fever.

Apparently, this fever, just like a regular one, is an acceptable reason to take the day off.

The team’s unprecedented playoff run and subsequent trip to the NBA Finals has caused a feeling of euphoria Toronto sports fans almost forgot existed, and they’ve been more than enthusiastic in displaying their excitement.

Jurassic Parks have popped up all over the GTA, but the original one outside of the Scotiabank Arena is where the magic really happens (outside of the actual arena of course, but who can afford those tickets?).

Of course, fans will do anything to get in, and even though it was early on a rainy Sunday morning in the Six, Raptors fans were out in full force.

Ten in the morning and Raptors fans are already locked and loaded for Game Two 👀. pic.twitter.com/xxghwQAPO6

We were impressed when we saw that people were already lined up to get into the square before noon. In fact, anything that happens between eight am and 12 pm on Sunday mornings is very impressive to us.

Did we mention that tip-off isn’t until 8 pm?

We didn’t need confirmation that fans had gone totally wild - but we got it anyways.