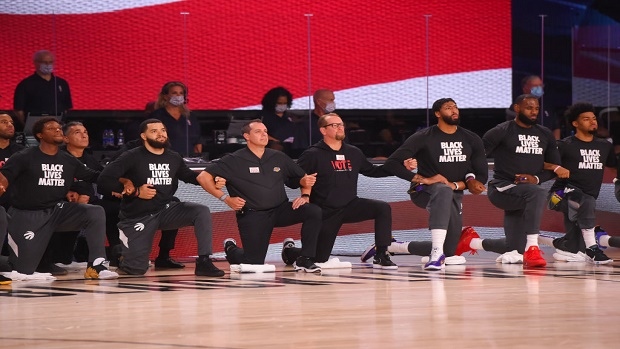 The Toronto Raptors said they were going to use their platform at the NBA Bubble to make a statement and that’s exactly what they did before their game back in action.

On Saturday night, the Raptors played their first meaningful game inside the bubble and showed up with different messages on their clothing.

The #Raptors already making a statement before their first game back. . (📷: @raptors)

Aside from their pre-game attire and the statements on the back of their jerseys, they also took a knee during both national anthems and were joined by the Los Angeles Lakers.

The #Raptors and #Lakers joined together and took a knee during both national anthems. . (📷: Bill Baptist/NBAE via Getty Images)

Players from teams across the league have been kneeling during the national anthem, but this was the first game that featured both the Canadian and American national anthems.