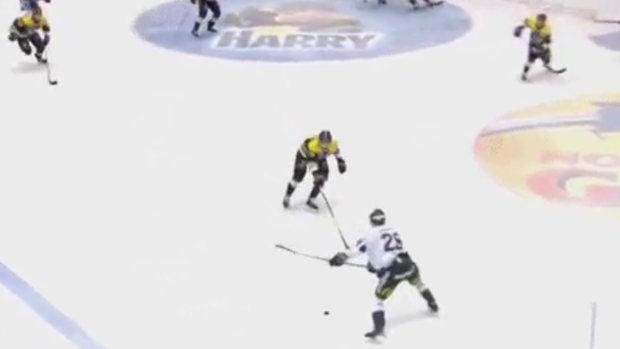 Rasmus Dahlin appears to be the next big thing in the NHL. It’s been years since there has been a defenseman prospect with his level of hype coming into the draft.

And it just keeps growing.

Throughout the World Juniors, Dahlin showed an preposterous ability to make defenders look foolish and stick handle through traffic to get to the net. Well, now he’s doing it again in the top Swedish league against some of the best hockey players outside of the NHL.

The unfortunate man who had to try to cover him on this shift was Oscar Sundh and he was on the wrong end of one of the most embarrassing dangles we’ve ever seen.

Rasmus Dahlin with some moves at the blueline vs HV71 today.... pic.twitter.com/SSVJeDW6YN

The fake slapper and quick hands are unbelievable when you consider that he’s straddling near the blue line and focusing on the net the whole time. Fans are going to be rooting for their team to tank more than ever after seeing this clip.

We can confirm that Rasmus Dahlin is good at hockey.#WorldJuniors pic.twitter.com/aJSIH499fy