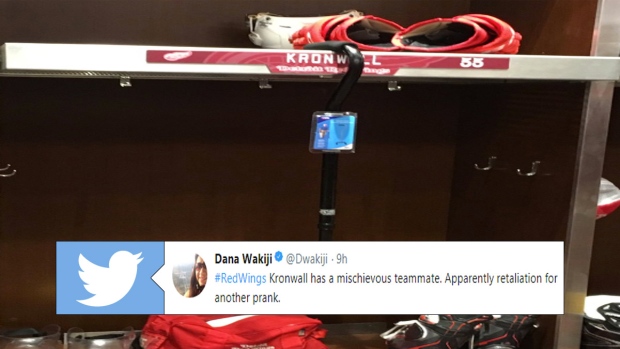 The past two seasons have been seasons to forget for the Detroit Red Wings and the near future isn’t looking very bright for them. At the moment, the Red Wings currently own the oldest roster in the league with the average age coming in at 29-years-old.

One of the oldest players on the team, and in the league for that matter, is Niklas Kronwall. Last month, the Swedish defenceman turned 37-years-old and his teammates are constantly reminding him that he’s getting up there in age.

#RedWings Kronwall has a mischievous teammate. Apparently retaliation for another prank. pic.twitter.com/IPSVYjwVqr

Kronwall arrived at his stall after the team’s practice on Friday morning and he had a special gift waiting for him from an unknown teammate.

37-year-old Niklas Kronwall had a cane waiting for him in his locker after practice. . Which one of his #RedWings teammates do you think is responsible? Find out at BarDown.com. . (📷: Twitter/AnsarKhanMLive)

Despite having more than 20 guys in the room to choose from, Kronwall immediately put the blame on Tomas Tatar.

Hearing Tomas Tatar the culprit as Niklas Kronwall found walker by his locker this morning. pic.twitter.com/F7t4ucPG73

Kronwall and Tatar have been teammates since the 2010-11 season and are 11 years apart in age, so it’s no wonder Kronwall knew who to blame as soon as he saw the cane at his locker.