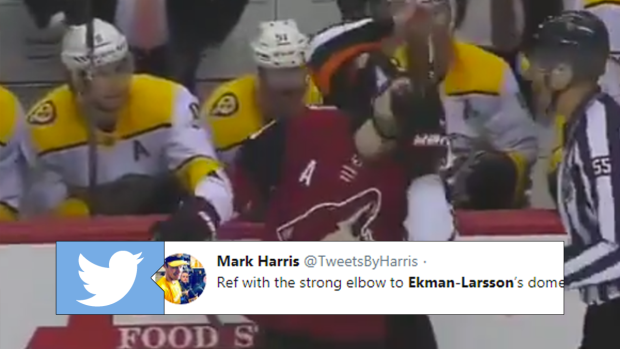 Referees take a lot of abuse in all sports, but NHL referee TJ Luxmore turned the tables against the Arizona Coyotes.

The Coyotes have had a rough season. They were eliminated from the playoffs this week, being the first team to do so, and now after being logically out of the playoffs for a long time, the team has started playing well and decreasing their likelihood of getting the first overall pick. Oliver Ekman-Larsson has been at the centre of it all, leading the team and having some struggles of his own this season.

He may not have had a worse night than he did on Thursday though, where are getting a penalty for crosschecking, he got an elbow to the grill from the ref who penalized him.

It’s hard to see the impact from that angle, but it clearly knocks Ekman-Larsson’s helmet back and he was feeling the pain for quite some time afterword. It almost looks like Ekman-Larsson was hoping to call those coincidental minors and avoid going to the box.