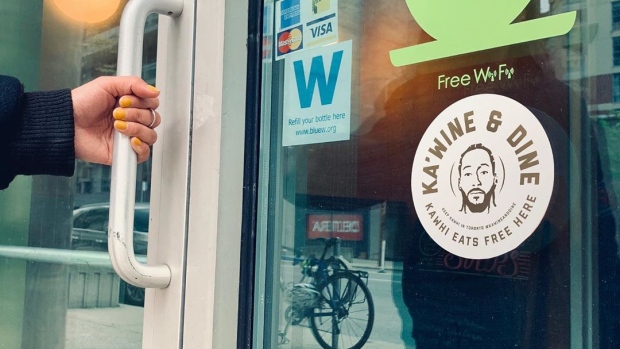 Considering that in his first season alone, Kawhi Leonard has already been able to knock down arguably the greatest shot in Raptors history, it’s no surprise that fans want him to stay now more than ever.

So how about this for an extra incentive? A movement among restaurants in Toronto, being known as #KaWineAndDine, is promising Kawhi free food for life if he re-signs. So, if you spot this sticker in the window of your local Toronto eatery, know that that’s a restaurant pulling their weight.

Even if Kawhi may not necessarily frequent these restaurants, it might go a long way to see just how much the city has embraced him in his brief time here. Whether that’s enough to sell him over the prospect of going home to Los Angeles, as rumours suggest he’s interested in, remains to be seen, but you can’t hate on the city coming together to give its best effort.

No doubt, there's a lot riding on the events of this upcoming offseason. After that game-winner, though, it doesn't seem too soon at all to anoint Kawhi as the King of the North.

Kawhi with the legacy shot 🙌 pic.twitter.com/ghU3E4tvrE