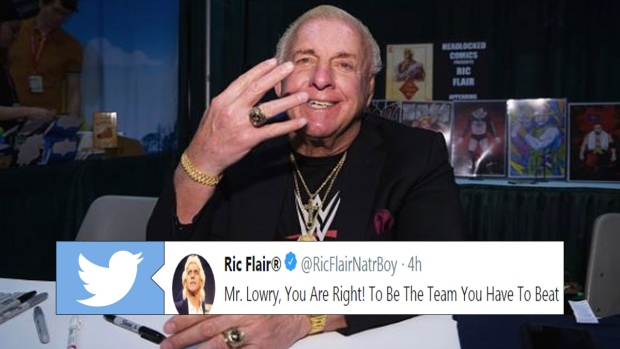 The Toronto Raptors and the Cleveland Cavaliers go head-to-head in the second round of the NBA playoffs and meet in the postseason for the third straight year. Ahead of Game 1, Kyle Lowry received a “special message” from one of the Cavs’ biggest celebrity fans to let him know what he’s in for on Tuesday night.

Kyle Lowry spoke very highly about his team heading into the Raptors’ second round series against the Cavaliers and believes that this year’s squad is the best they’ve ever had and they’ll be able to take down the Cavs. While Ric Flair agrees with Lowry that the Raptors are the team to beat, considering they finished with an Eastern Conference-best 59-23, he was quick to remind the point guard that he has to take down LeBron first.

As for the Raptors, they’ve been eliminated by the Cavaliers the past two seasons, in four games last year and six games the previous year, but they’re hoping this year’s roster has what it takes to finally take down LeBron in the postseason.

The #Raptors are looking to win the Larry O’Brien Trophy but they need a new plan to get by #LeBronJames and the #Cavs.