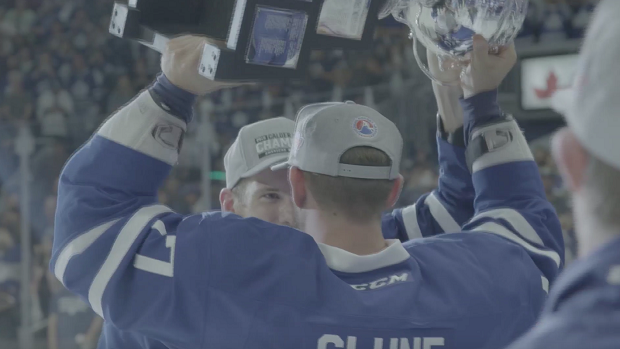 It’s not easy for everyone with addictions or mental illnesses to open up about their lives.

Toronto Marlies winger Rich Clune developed an addiction to drugs and alcohol during his time in the OHL to the point where it threatened not only his career, but his life, as well. Shortly after he made his NHL debut, Clune made the choice to check into a rehab clinic to get sober and turn his life around.

Now sober for more than 10 years, Clune recently opened up about his past addictions and his struggles with substance use disorder while playing in the NHL in the documentary; ‘Hi, My Name is Dicky’, and he doesn’t hold anything back.

“They’re gonna talk about me once a year. I’m gonna be dead. That’s the hard truth.”

Can’t thank @richclune enough for joining us on Coast to Coast to talk about "Hi, My Name is Dicky".

Clune discusses everything in the documentary, which is currently the #1 documentary and #1 sports film on the Apple charts, from his time leading up to the OHL and being in the OHL, to making it to the professional level and winning the Calder Cup.

The Marlies winger recently mentioned on Penalty Box Radio's Coast to Coast podcast that lifting the Calder Cup was his favourite career moment and explained why.

Can't thank @richclune and @taylorprestidge enough for coming on the podcast to talk about "Hi, My Name is Dicky" and other topics.

It's a must-watch documentary and proceeds from every stream will be donated to mental health initiatives & COVID relief. pic.twitter.com/iHiTcP9Utn

The 33-year-old has truly become a role model for a lot of the younger players entering the NHL as he’s been able to guide them on the proper path as a professional. One player he really bonded with during his time practicing with the Toronto Maple Leafs in Phase 2 is Nick Robertson, who just about every single Leafs fan is excited about. And Clune says they have every reason to be excited about the youngster.

Proceeds from the streams will be going towards mental health initiatives and COVID-19 relief.

Thanks for having us on. Nice to know you have a huge fan base in Nashville. I loved that city and they have amazing fans. https://t.co/e6rchyLwJ0