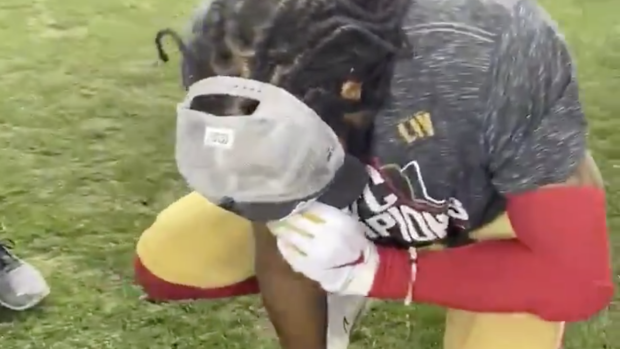 Richard Sherman has been through an emotional rollercoaster on his journey to the Super Bowl.

We all remember the Seattle Seahawks vs. New England Patriots game back in 2015. In a matter of seconds, Sherman went from thinking he was a Super Bowl champion, to a heartbreaking reaction in a literal game-changing moment when Russel Wilson threw a game-losing interception on the 1-yard line.

Sherman suffered a season-ending Achilles injury in 2017 and the Seahawks released him in March of 2018.

Shortly after, the 49ers signed the cornerback to a 3-year contract and 2019 was named a Pro Bowl starter.

Finally, after his 2nd season with San Francisco, Sherman earned a trip to the Super Bowl and it was emotional.

From a torn Achilles to proving the doubters wrong.@RSherman_25's journey back to the @SuperBowl has been incredible. #GoNiners #NFLPlayoffs pic.twitter.com/YbdHUNZstq

His journey has not been easy and he has support all around him.

Love this guy. Educated. A competitor. Always has an unwavering belief in himself.