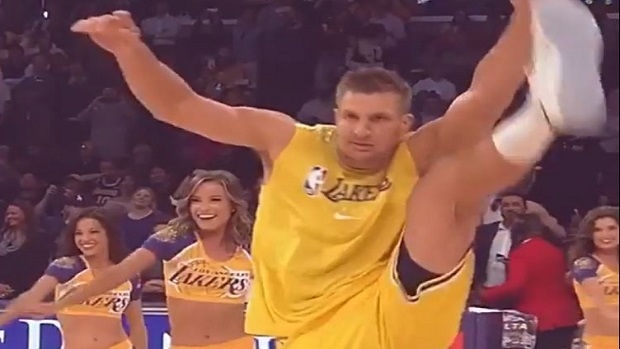 All season long football fans have been expecting Rob Gronkowski to shock them and announce he’s returning to the NFL and the New England Patriots.

However, he recently put those rumours to rest when he said that he hasn’t ruled out a comeback, but it’s not going to happen this year if it does end up happening.

On Tuesday night the 30-year-old was in attendance at the Los Angeles Lakers game, only he wasn’t just there to take in the action. He was there to show off his dance skills with the Lakers Girls.

Rob #Gronkowski has a new gig in Los Angeles 😂 . (🎥: @houseofhighlights)

Gronk wasn’t alone out there, though, as he was joined by Venus Williams and James Corden.

We know Gronk loves to bust a move on the dance floor but he should really consider returning to football after that routine.