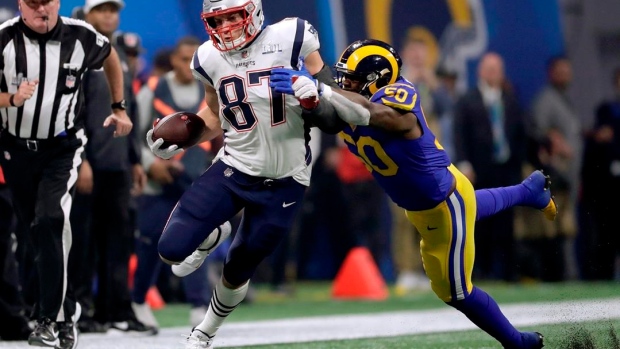 Gronkowski makes 2 key caches in what could be his last game Article Image 0 , The Canadian Press

The Patriots are reloaded, with the addition of Antonio Brown to bolster their receiving corps. Could more reinforcements be on the way?

Rob Gronkowski has the Twitter detectives out and about after tweeting a single emoji. The Patriots did just trade Demaryius Thomas to the Jets for a sixth round pick after all, so there IS a free roster spot.

Please be a comeback announcement.

Now we need to figure out what this means.

The #Patriots did just create a roster spot by trading Demaryius Thomas... https://t.co/kQDsS17e7s

Considering that this is Gronk we’re talking about, there are definitely some alternative outcomes in play.

this could be anything from a comeback to seeing a dog with a fluffy tail https://t.co/eeyh7kmvnD

There’s a 10% chance this means Gronk is coming back but also a 10% chance Gronk is the new spokesperson for a company that sells edible Tide pods https://t.co/BxWgRw61e5

Announcement of a massive cargo-short partnership just minutes away. https://t.co/RXvJctFu4W

Even when Gronk announced his decision to retire, there were some questions about whether or not it would really last. And now, with AB in the mix in addition to Tom Brady? Come on! How can you turn that down?

Things only ever go in the Patriots’ favour, but this is a comeback that we’d be on board with.