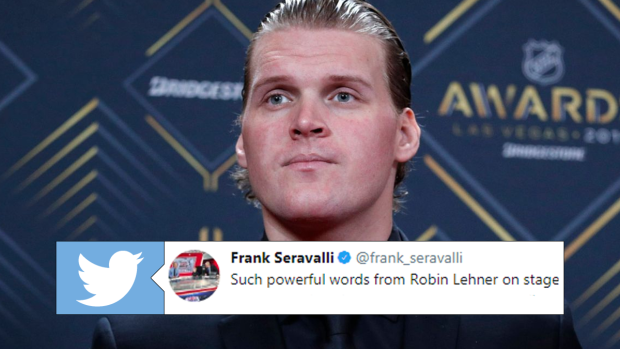 Robin Lehner has won his way into the hearts of hockey fans everywhere with his incredible story of redemption. After opening up about his substance abuse and addiction issues, Lehner not only returned to the crease a stronger person, he also helped the New York Islanders to an unexpected 103-point season.

On Wednesday, he was honoured for his perseverance and dedication to the game, capturing the Bill Masterton Memorial Trophy. When he took the stage, he delivered a tear-jerking speech that inspired all those watching.

We look forward to see how Lehner continues to develop as a goalie, and as a human. He’s overcome adversity, and he’s inspired so many by doing so.

Such powerful words from Robin Lehner on stage: “I’m not afraid to say I’m mentally ill, but that doesn’t mean I’m mentally weak.”

Congrats to @RobinLehner on the Masterton trophy. Well deserved and great acceptance speech.