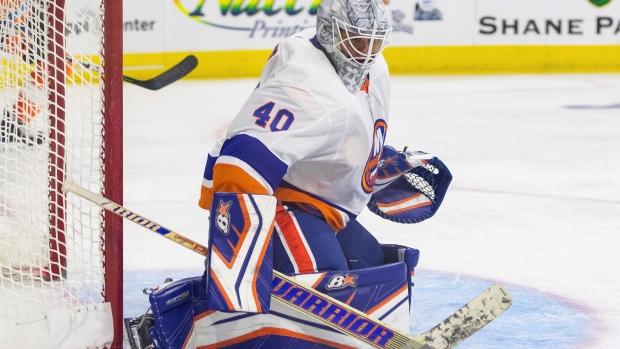 Goalie masks are one of the most unique pieces of equipment in all of professional sports.

While some goaltenders chose to keep it simple, most elect to tell a story or offer a reflection into one's personal life, which can include their heritage, family members or some sort of tribute for the pioneers that carved the pathway before them.

Over his eight-year tenure in the NHL with the Ottawa Senators and Buffalo Sabres, Robin Lehner has honoured a fallen police officer and referenced Hall of Famer Dominik Hasek on his masks.

But this time around, Lehner is choosing to recognize himself in what is actually a very selfless work of art.

Prior to training camp, the now New York Islander opened to the Player's Tribune up about his struggle to combat his bipolar disorder,  depression and an alcohol dependency.

Lehner's personal battles eventually caught up with him in late March of the 2017/18 season, forcing him to leave midway through a game against the Red Wings, which turned out to be in last in a Sabres uniform. Battling bouts of suicide, Lehner left the team to begin treatment at a rehab facility in Arizona.

With Lehner moving from upstate New York over to Long Island, the 27-year-old Swede reached out to fellow countryman David Gunnarsson, who's become one of the most popular mask artists in the goalie community across the world, to symbolize his story.

Given Lehner's struggles and his road to recovery, Gunnarsson produced one of the most meaningful masks he's likely ever designed.

"The most important part of (the) mask is the sides, there is the sun at dawn☀️, describing the start of the new life for Robin when he decided to seek help for himself and his family and also follow Jesus and get baptised," explained Gunnarsson in the caption.

Most hockey players are reserved and chose to separate hockey from everyday life in the public's eye.

But considering what the Islanders goaltender went through at the start of 2018 and many years before, it took an incredible amount of strength to let the world know of one's struggles the way Lehner did.

Lehner will look at his mask each and every day for the foreseeable future reminding himself of the journey while simultaneously serving as a conveyor to inspire others to come forward and confront their own personal demons.

Every mask tells a story. For @RobinLehner, it's about years of personal struggles with mental illness.

The side features the sun at dawn, which signifies the start of a new life for Robin after he decided to seek help for himself and his family. (Created by @daveartofficial) pic.twitter.com/qH1xBX1tMB

For anyone experiencing similar symptoms that Lehner endured, just remember that there's nothing to be ashamed of by reaching out to get the appropriate help.