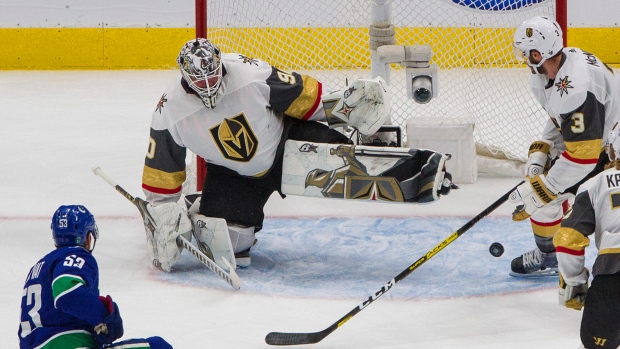 After a high-profile battle with mental illness and drug addiction that he himself has been extremely open about, Robin Lehner has been able to re-establish himself in the NHL over the last two seasons in what has been an incredible comeback to watch.

However, Lehner acknowledges that his whiteness played a role in his ability to get a second chance. In an interview with Swedish website Sportbladet, Lehner says he believes his NHL career would be over if he were a Black player fighting mental illness and addiction.

“I said as I thought to Ryan [Reaves]: After everything I went through and said and done, I am convinced that I [would] have been thrown out of the league by now,” Lehner says via Google Translate. “I'm absolutely sure. You have to look in the mirror and realize that you have a white privilege.”

Lehner also spoke about the NHL players' protest over the last two days, when scheduled games were not played, and said that players were protesting police violence as well as racism in a more broader context.

“It has become a bit of a misunderstanding that it is only about the latest police shootings. They are awful to see, but it gets simplified by focusing only on them. It is racism in general that we want to point out. As I said, it is everywhere,” said Lehner.

“The NHL is a very white league and it is important that we white players take responsibility and push for change. Our league should be open to everyone,” he added.

Lehner was one of the very first players in the NHL to kneel during the national anthems, joining his Black teammate Ryan Reaves as well as Jason Dickinson and Tyler Seguin of the Dallas Stars during both teams’ first game in the bubble. Lehner, Dickinson and Seguin were the first white players to kneel in the NHL.