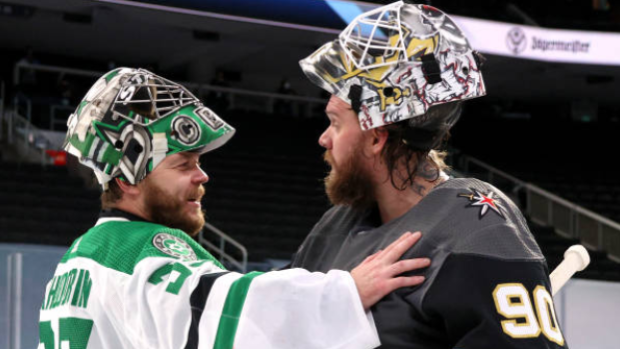 The Dallas Stars are off to the Stanley Cup Final after defeating the Vegas Golden Knights in dramatic fashion. An OT winner from Denis Gurianov sunk the dagger into the Knights.

While lots of hockey fans were likely cheering against the Knights, it’s hard to cheer against Robin Lehner as a person. One of the most likable players in the league following his opening up of mental health issues and substance abuse, mixed in with his entertaining personality, Lehner’s story is one that can inspire anyone.

On top of that, Lehner was an absolute monster all playoffs long. The Knights trade deadline acquisition commanded the Knights crease to the tune of four shutouts and a sub 2.00 goals against average.

After the loss, Lehner tweeted out a classy message humbly thanking fans for their support while congratulating the Stars on their advancement.

Not what we wanted.. we all put everything in to this run here in Edmonton. Thanks to all the fans that supported us. This team is special and will come back better. Congrats to @DallasStars wish them the best.

It’s unclear what Lehner’s future with the Knights holds as he has confirmed there’s no extension yet, but it’s clear he’s fully won the fan base over. In fact, he’s won just about the entire hockey community over.

You’re a class act for how you’ve responded. High emotions after a series ends. You showed you can be a #1 on a deep-run team. Hurts for everyone now, but makes you want it that much more as your careers continue. Excited to continue to watch you rise above.

Hope to see you back next season Robin! Thanks for all you did for Vegas during these playoffs! pic.twitter.com/mNwbmzyaxR

Hey, thanks though. We can't win them all. Everyone did everything they could. And some teams still haven't been to the playoffs, let alone the WCF in a long time.
Thanks to everyone again!

It was a good run! Hope to see you back in black and gold next year Panda!! 🖤🐼💛