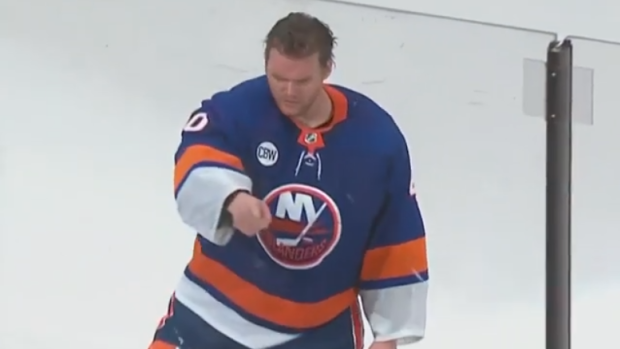 The New York Islanders are up two against the Pittsburgh Penguins, and what could be better for an Isles fan in attendance than to be gifted Robin Lehner’s game-used goalie stick after another strong performance?

Somebody else was also trying to get their hands on Lehner’s stick, but much like the Penguins’ shots on goal, Lehner didn’t let that past him. When he sees that his stick ended up with the wrong fan, he whips around and makes sure it ends up in the right hands. Good guy Lehner!

Robin #Lehner making sure the right fan got his stick 😂👏 • (🎥: @nhlonnbcsports)

It’s been a fairly impressive season in net for Lehner, and all the more special of a comeback after his battles with substance abuse and mental health issues. He’s become a fast fan favourite, so if it was anybody’s stick that you could get, Lehner’s certainly a good one.

This guy even let loose with a NSFW moment after the Isles clinched the playoffs, much to the delight of Isles fans.