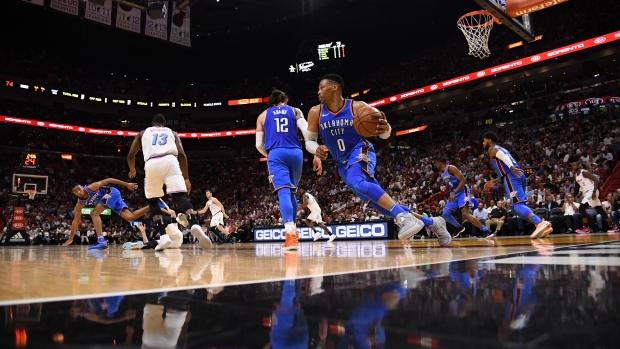 If you caught any of the Oklahoma City Thunder game against the Miami Heat on Monday night, you may have noticed that Russell Westbrook was attacking the glass with more tenacity than usual, finishing with 18 rebounds. It wasn’t just that he was rebounding well, but that he was making a concentrated effort to crash the boards, even stealing rebounds from his teammates at times to pad his stats.

Look, nothing against the very real value of rebounding, but it’s very possible that nobody has ever cared this much about rebounding.

Was there any particular reason that Westbrook was so zeroed in on rebounds, you ask? Well, yes: With a win, the Thunder could clinch their playoff spot in the Western Conference. And also, Westbrook, having raised his season averages to 25.6 points, 10.1 assists and 9.8 rebounds, is on the cusp of doing something never done: averaging a triple-double in back-to-back seasons.

#RussellWestbrook is the newest member of the 100-triple-double club. . (📷: @nba)

If you recall, Westbrook became the second player to ever average a triple-double when he did so in last season’s MVP-winning campaign. Even the legendary Oscar Robertson, however, only managed that feat once in his 14-year career, much less in back-to-back years. Westbrook is encroaching upon unmarked territory -- a truly rare thing in sports.

Russ is going to be ridiculous.