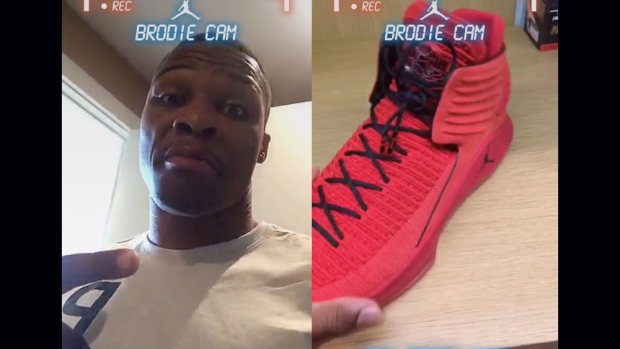 The Air Jordan Brand produced by Nike is a staple in any shoe collector's goods. Whether you’re a collector, athlete or just a fan of basketball, the “Jumpman” brand has likely resonated with you at some point in your life.

Nike unveiled their newest model of the sneaker, the Air Jordan XXXII, with the shoe being released on September 23. Inspired by the Air Jordan II released back in 1986, the sneakers will be available in black and red, matching the Chicago Bulls colours that MJ embodied.

Kawhi Leonard, Jimmy Butler, Carmelo Anthony will rock the shoe this coming season, as well as reigning NBA MVP Russell Westbrook, who headlines the brand and will be the face of the company for the fifth straight season.

Westbrook gave fans a look of the brand’s latest release on Tuesday night, showcasing a pair on his Snapchat account that featured his own “Brodie Cam” filter, a shutout to his supposed nickname for himself, his brother, and his dog.

The sneakers will set you back a cool $185 USD. Jordan will also release both mid and low editions that’ll drop October 18, matching the date that MJ played his first ever preseason game back in 1984.