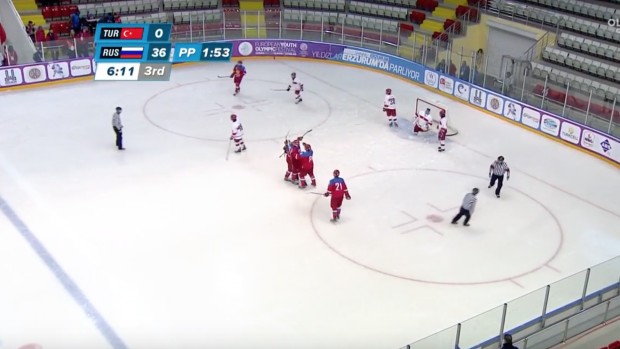 When it comes to the age old argument of taking it easy on your opponents because the score is seemingly out of reach, there really is no winning with whatever decision you make.

For instance, in hockey, if you get up big and just mail in the rest of the game to not run up the score, you get ridiculed for the decision, and the same thing can be said if you continue to play as hard as you can without any remorse for the opposing team.

We're sure Russia had remorse in their Winter European Youth Olympic Festival game agains Turkey, but that didn't stop them from winning the game by an unbelievable score of 42-0.  Here's the entire game if you feel like watching 42 goals.

And here's a period by period breakdown of the destruction:

Watching the final seconds of the game, you can just see that the host Turkish team is still holding on for dear life while Russia continues to try and fill the net with pucks.

Obviously in terms of skill it was a mismatch, but Turkey has to go through games like this before they improve.

Russia takes on France on Tuesday in the tournament, but we imagine the result won't be close to the same as it was against Turkey.