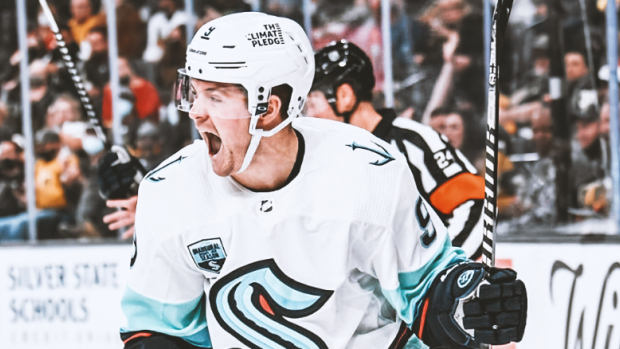 The Seattle Kraken are officially an NHL franchise after debuting their inaugural season against the Vegas Golden Knights. So begins the growing list of “franchise firsts” as they find their legs in the league, but we’ll spare you the long list and focus on just one very important and historical moment.

Ryan Donato became the first Seattle Kraken player to record a goal for the franchise.

While the players will likely say that it doesn’t matter who scores, as long as the puck goes in, there’s definitely a little extra special sauce slathered on Donato’s tally.

The hockey world was quick to congratulate the American for his entrance into the history books:

How sick would it be to score the first goal in franchise history?

GOAL. Lehner gives up a rebound and Donato fights off Martinez to sweep in the first goal in Kraken history.

Ryan Donato on a rebound attempt from the doorstep, just after the power play had expired.

Unfortunately for the Kraken, they couldn't quite match the Vegas Golden Knights. After coming back from a 3-0 deficit to tie it, Chandler Stephenson scored a goal that deflected off his foot and into the net. Vegas would hold on for the 4-3 finish.