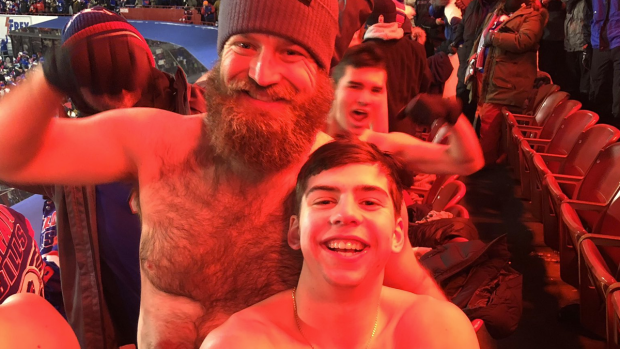 By now it’s well known, Bills Mafia is one of the crazier fan bases in sports. We all know about their love of jumping through tables on gameday. It’s not a real Buffalo tailgate until someone crashes through the table you just ate lunch on.

But tables aside, Bills Mafia has a whole lot of love for their players, both past and present. And although he’s not currently a member of the Bills, Ryan Fitzpatrick is a legend both in and out of Buffalo. Fitzpatrick spent four years playing for Buffalo and he was in attendance during Buffalo’s dominant win over the Patriots in the Wild Card Round.

Not only was he in attendance, but he was seen in the stands posing with fans. He was even taking photos without a shirt on!

Let us remind you that it was well below freezing. Just look at Mac Jones for evidence of that.

Mac Jones trying to listen to Josh McDaniels, but too fascinated looking at his own breath: pic.twitter.com/pwZUFxz6sV

The legend of Ryan Fitzpatrick continues to grow. He may not be a hall of famer, but he’ll forever be known for his late game heroics, his remarkable beard, and being one of the most beloved players that we can remember.