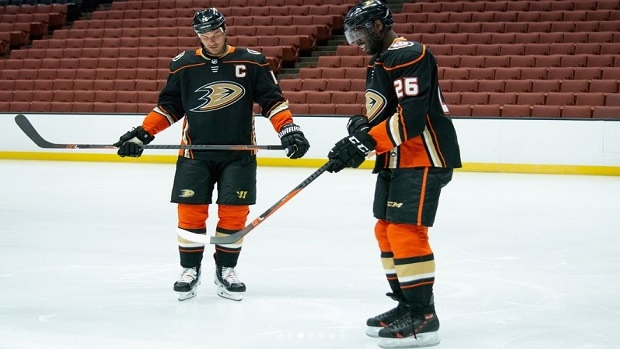 Tottenham Hotspur F.C. are currently competing in the 2018 International Champions Cup and are preparing for a tilt with Roma at the SDCCU Stadium in San Diego, California.

Since the players and team representatives have plenty of time to kill in California before Wednesday night’s match, former defender and team ambassador Ledley King stopped by the Honda Center, where he got to learn all about the game of hockey from Ducks captain Ryan Getzlaf.

With Tottenham Hotspur in town for the International Champions Cup, former defender and current @SpursOfficial ambassador Ledley King stopped by @hondacenter to learn the finer points of hockey with #NHLDucks captain Ryan Getzlaf. Here’s a lesson on equipment first. #SpursInUSA

The former Tottenham Hotspur didn’t just get a verbal lesson from Getzlaf, though, as he also suited up in his own custom gear and then took to the ice to get the full hands-on experience.

Getz and Ledley King hit the ice. Check out our story for more. Video feature coming later this week. #spursinusa

The former representative of the English national soccer team also got to see what it’s like to shoot on a goalie in full equipment, as he got to shoot on two-time Olympic silver medalist and current Ducks employee Molly Schaus.

Getz shows @LedleyKing how to shoot the puck, with #NHLDucks staffer and two-time Olympic silver medalist @schaus729 in net. pic.twitter.com/FbJ9kk8cDj

And the most important part of hockey - the goal celebration. pic.twitter.com/aObZ3qxEdu

In the end, King went home with his first real taste of hockey under his belt and some custom Anaheim Ducks gear, and he made sure to leave Getzlaf and the team a custom Hotspur jersey as well.

@spursofficial + 🦆 = a fun day @hondacenter! Take a look at some of the best photos from Ledley King’s visit and hockey lesson. #spursinusa