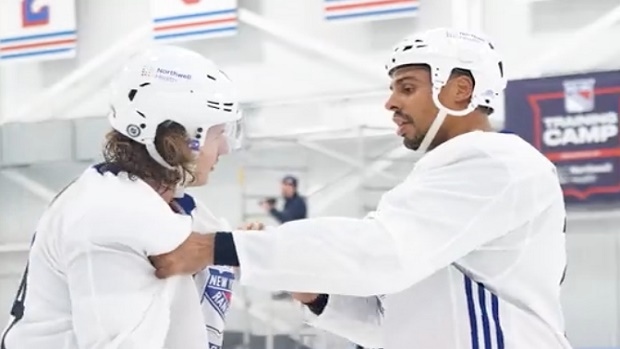 When Ryan Reaves was traded from the Vegas Golden Knights to the New York Rangers for a third-round pick in 2022, right away, people assumed that he was the obvious fix for the Rangers’ ‘Tom Wilson problem’.

Today, it looked like Reavo was recruiting a couple more fists for the cause.

Training camp and pre-season is all about getting comfortable for the year ahead in all parts of the game, and depending on what kind of player you are, part of that preparation includes fighting. Some players might need a little bit more tuning up than others in that department, and today at New York Rangers practice, Ryan Reaves was giving Vitali Kravtsov some pointers when it comes to dropping the mitts.

Not a bad guy to learn from!

Kravtsov was drafted ninth overall by the Rangers in 2018, and doesn’t have any career fights recorded.  Reaves is known to be one of the baddest men in the NHL, so Kravtsov definitely picked a good teacher.

We’ll see if he ever has to test out his skills  during a game!