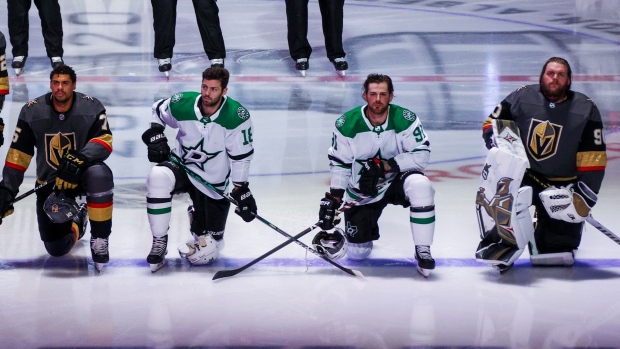 After Matt Dumba became the first NHL player to take a knee during the U.S. national anthem on Saturday, four more players chose to kneel before the Stars-Golden Knights game on Monday.

The Golden Knights’ Ryan Reaves and Robin Lehner and the Stars’ Tyler Seguin and Jason Dickinson took a knee during both national anthems, becoming the first players to kneel during the Canadian anthem before an NHL game.

Reaves is Black, while Lehner, Seguin and Dickson become the first white players to kneel during the anthems. With the exception of Lehner, who is Swedish, the three other players are all Canadians, same as Dumba.

#stars Tyler Seguin and Jason Dickinson kneel alongside #VGK's Ryan Reaves and Robin Lehner for both American and Canadian nat'l anthems. They are #NHL's first players to show support with Matt Dumba in fight against racial injustice, two days after Dumba became first to kneel. pic.twitter.com/ZryP8ZIsBM

This is the Stars and Golden Knights' first game since the NHL returned to play; they are the last teams to make their debut. That four players at once chose to kneel is a pretty strong statement, and it’s worth watching to see if it encourages any other players to join in the gesture.

After Dumba’s decision to kneel during the American anthem, no other players kneeled before any of the games on Saturday or Sunday, and it was a point of discussion whether or not he would receive any support, particularly from non-Black allies in the NHL.

Incredibly powerful words from Matt Dumba ahead of the first game in Edmonton. . (🎥: @nhlonnbcsports)