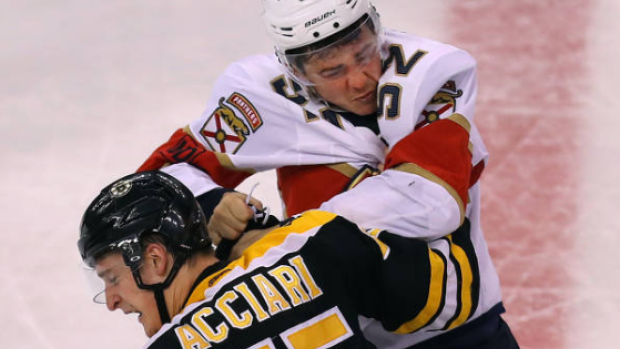 At the start of every hockey season, almost every team welcomes a new addition or two to the team, whether it was free agency or from the trade market.

Past instances are put aside and handshakes are executed, as players on the team welcome their new teammates aboard. It doesn't matter if there was a fight or two between the newbie and some of his new teammates, because hatchets are usually buried.

For the Florida Panthers, they were one of the busier teams on July 1st, inking Sergei Bobrovsky, Noel Acciari, Brett Connolly and Anton Stralman. When Acciari signed, it meant he'd now be teammates with MacKenzie Weegar.

Weegar and Acciari actually fought twice last year in two great bouts, in which Acciari won both of.

Former Panther Ryan Whitney, who now stars on the Spittin Chiclets podcast, had a friend prank Weegar. Utilizing his connection of current Panther Keith Yandle, one of Whitney's friends pretended to be Acciari and texted Weegar asking if he could take his No. 52.

Take it away, Whit dog.

This really took on a life of its own in a hilarious manner. The best part was easily when Weegar noticed that Acciari doesn't even wear No. 52.

@spittinchiclets absolutely hilarious prank! Foley and Yands have gotten me twice now.. waiting for my opportunity. #52😂

You know Acciari will have a laugh about this one, and the two new teammates will surely be bonding over this segment now.