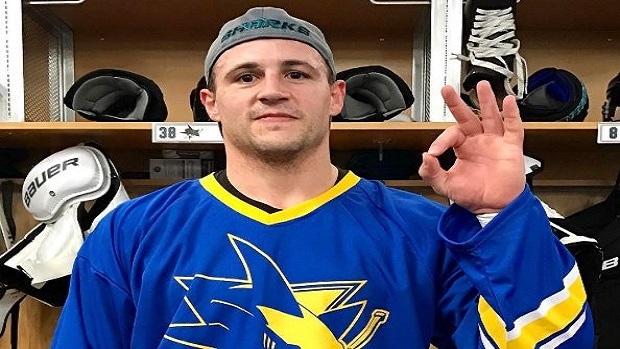 The San Jose Sharks host the Arizona Coyotes on Saturday night and every fan in attendance is going home with something special. The team is hosting its Warriors Night on Saturday, which means fans in attendance will be taking home their own version of these awesome mashup jersey.

This #SJSharks and @warriors giveaway for tomorrow's game. 😍

According to the Sharks’ Twitter account, they needed to add extra tickets for the game because so many fans wanted to get their hands on this awesome giveaway.

However, when your dad is Brent Burns, you get to skip the line.

However, as great as the mashup jerseys are, the players will be hitting the ice in different jerseys.

These @warriors warmup jerseys for tonight are 🔥🔥🔥. They'll be up for auction tonight too, benefiting @vettix

This isn’t the first time the Sharks have partnered with the Warriors for an awesome giveaway. Check out this Klay Thompson bobblehead they gave out during the preseason.

It’s also not the first time the Sharks have shown some love for the other teams surrounding them. They also wore these San Francisco Giants jerseys a couple of months ago.

The latest in #SJSharks practice jerseys: these @sfgiants beauties, to be worn during warmups.

The team is still expected to rock its regular teal and black during the game, but these are still awesome mashup jerseys.